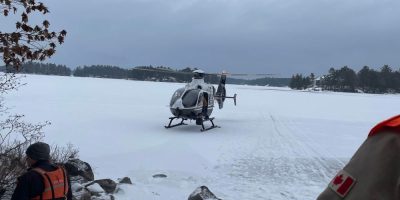 Ontario Provincial Police divers have suspended their search for a missing snowmobiler due to darkness, while a second sledder has been hospitalized after their machines went through the ice on Six Mile Lake near O’Leary’s Island in Georgian Bay Township.

Police, fire and paramedics arrived on the scene and took over rescue attempts from residents who were trying to assist the snowmobilers. One person, a 59-year-old man, was taken from the frigid water and transported to a local hospital. An OPP spokesperson says he is expected to survive.

Police say the search for the other male will resume Monday morning.