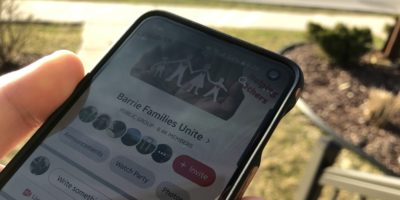 Christina Johnston of Barrie had some bad luck the other day. But boy, did it turn around from there.

The 71-year-old woman lost an envelope containing $300 at a parking lot in the city on Thursday, and thanks to a local Facebook group, ended her day with double that.

“She doesn’t do online banking or any of that stuff. She likes to have her cash to go to the bank to pay her bills,” Christina’s daughter Natasza told Barrie 360 on Friday, adding her mom stopped for gas on the way to pay those bills. “She realized she didn’t have that envelope. So she scoured her car 100 times over, went back to her house, scoured her house, scoured all the jackets, and then we proceeded to go back to the gas station. So we asked if anybody had turned in the envelope, we looked around the floor, looked around the ground, unfortunately, there was nothing.”

That’s when Natasza turned to the Facebook group Barrie Families Unite. “So I made a post that I called a ‘wishful post,’ that maybe I could touch the right person with that envelope, and they could maybe make the right decision to return it,” Natasza continued. “Turns out, I touched all the right people and they in turn touched her and I back tenfold.”

After reading her mother’s story, members of the group got together and began an online donation campaign. Five dollars here, ten dollars there, and before the day was done, Christina had recouped her losses and then some. “Within one hour, she doubled what she had lost. The gratitude! I don’t even know if I’ve ever felt that much in my life from complete strangers of our community.”

After seeing the community rally behind her mother, Nataza immediately drove over to deliver the good news. “She was shocked. She was shaking. Her eyes, that was so puffy from the tears, were now engulfed with tears of joy and happiness.”

“She said ‘I can go to bed, happy, even more happy than I started my day, because of people I have never met.'”