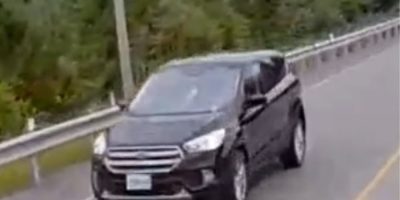 A motorcyclist was seriously injured after the rider had to veer into a ditch to avoid a collision with a vehicle on Sideroad 10.

South Simcoe Police say this happened on Monday around 3:30 p.m. between Innisfil Beach Road and Line 9. They say a southbound black Ford Escape, believed to be model year 2017-219, entered the northbound lane forcing the northbound bike rider to veer into the ditch. The motorist did not remain at the scene.

She is described as a white female, about 32-years-old with blonde hair.

Police have released an image of the suspect vehicle in the hope someone can identify the driver or the vehicle. Investigators are also requesting dash camera footage from motorists in the area at the time of the collision.

Anyone with information or video that can assist police is asked to contact Constable Capeloa at 705-436-2141, extension #1490, tiago.capeloa@southsimcoepolie.ca or contact Crime Stoppers.