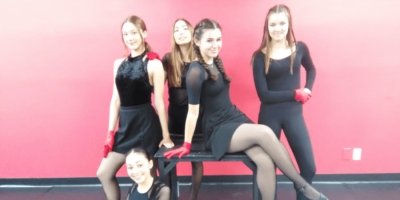 Tkaia Green had her sights set on playing the part of Velma, one of the lead characters in the movie Chicago until she saw the musical version and from that moment on, it was Roxie Hart for her.  The show wraps up the year for Moving Art’s Senior Triple Threat (STT) program.

“I think it’s her desire to be famous and she will do anything to get there,” said Green. “I aspire to be like that – to go to the top.”

For Green, the top is Broadway. Her interest in singing began in Grade 5 and grew to include private vocal lessons. Her family likes to sing karaoke at home. Currently, in her second year at Moving Art, the program combines her love of singing with acting. She will be going into musical theatre at Sheridan College in September.

The story, set in the 1920s, centres on Roxie who is in jail for murder. Velma Kelly joins her there. Initially, they are rivals for the spotlight and headlines but ultimately join forces in fame, fortune, and acquittal.

The 2002 movie, based on stage musical, starred Renée Zellweger as Roxie, Catherine Zeta-Jones as Velma and the slick Chicago lawyer, Billy Flynn was played by Richard Gere. The Barrie show, Chicago high school edition, has been adapted for youth.

Darius Kent, a Grade 9 student at Eastview Secondary School, takes on the role of Billy Flynn. He says it’s fun playing a mischievous character who knows how to manipulate people and will do whatever it takes to stay on top.

He can remember seeing Moving Art shows when he was in elementary school. It inspired him to join STT, a program that encompasses singing, dance, and acting.

“The first show I saw was Peter Pan and it made me think it was something I’d like to do,” he said.

Angelique Croteau plays Matron “Mama” Morton. She knew she had to play that character, the ‘Mistress of Murderers Row’  from the moment Moving Art announced the show.

“She’s kind of the head dog,” she said. “It’s exciting to try and fill Queen Latifah footsteps. I think she’s the archetype of feminine power. When she walks into a room, she knows what she wants and how to get it. Everybody listens. I love that – aspired to it – and I like that she’s ambitious too.”

Croteau is in last year of STT before graduating from St. Joseph’s Catholic High School and she has her heart set on a classical voice and opera performance and has auditioned at several universities. Her interest was sparked when she saw a Toronto performance of Carmen several years ago.

Chicago showtimes are May 25-26, June 1-2, evening and matinee performances, at The Loft Art Space, Moving Art, 125 Anne St. S. Barrie. Tickets are $20 each plus HST, are available through  https://dancestudio-pro.com/tickets/movingart.