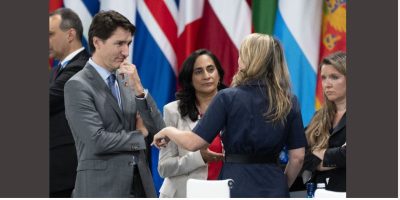 By Laura Osman in Madrid

Canada found itself under the spotlight on Wednesday as the head of the NATO military alliance said he expects Canada to fulfil its commitment to other members and increase its defence spending to meet the needs of an increasingly dangerous world.

NATO Secretary-General Jens Stoltenberg made the comments at a news conference on the sidelines of a NATO summit in Spain after the first of several meetings with Prime Minister Justin Trudeau and other leaders of the 30-member transatlantic alliance.

NATO leaders, including Prime Minister Justin Trudeau, have gathered in Madrid for the landmark summit to discuss how they will respond to Russia’s ongoing invasion of Ukraine.

Among the numerous decisions that Stoltenberg said had been taken by leaders was a recommitment for all members to spend at least two per cent of the national gross domestic product on defence, a target first agreed to in 2014.

“Two per cent is increasingly seen as the floor, not as the ceiling,” he said.

Yet while the vast majority of allies already meet the threshold or have laid out specific plans to reach it by 2024, Stoltenberg said a handful have made “concrete commitments” without a specific timetable.

Canada is almost certainly in the last group as the Liberal government has refused to publicly commit to the two per cent target, let alone lay out a schedule for meeting it.

In fact, a report released by Stoltenberg on Monday projected Canadian defence spending will actually fall as a share of GDP to 1.27 per cent this year. That compares to 1.32 per cent last year and 1.42 per cent in 2020.

The parliamentary budget office has estimated it would cost $75 billion over five years to reach the NATO target.

Asked about Canadian defence spending, Stoltenberg told reporters that he understands the desire to spend taxpayer dollars on health care, education and infrastructure. But he said members need to invest in defence as the world grows more dangerous.

“I expect all allies to meet the guidelines that we have set,” he said. “So of course, this is a message to all allies, including Canada.”

Stoltenberg nevertheless praised Canada for leading a 2,000-soldier battlegroup in Latvia, one of eight that alliance leaders agreed to strengthen in eastern Europe in response to Russia’s invasion of Ukraine.

He also said leaders had formally agreed to double the size of those battlegroups by adding more troops and capabilities, while also increasing the number of soldiers on high-readiness from 40,000 to 300,000.

Foreign Affairs Minister Mélanie Joly said, when pressed by reporters on defence spending, that Canadians can be proud of the country’s work within NATO and in the Ukrainian conflict in general.

Canada has played a “leadership role” in training more than 30,000 Ukrainian troops through its mission Operation Unifier and providing heavy weapons to the country, she said.

“We are leaving a very important presence, military presence, in Latvia,” she added.

Joly emphasized the role of diplomacy in responding to Russia’s aggression. She announced Canada will open embassies and appoint ambassadors in Estonia, Lithuania, Slovakia and Armenia, and reinforce its diplomatic presence in Latvia.

Canada must push back against Russian influence, including its soft power, disinformation campaigns and brute force, she said.

“We believe that diplomacy remains one of the most effective ways to support security and stability and also to respond to challenges in a world experiencing a profound geopolitical shift,” Joly said.

“It sure seems like the alliance is looking to make some concrete announcements about increased actual capabilities, on higher readiness for the alliance, and I’m interested to see whether or not we have any more gas left in that particular tank,” said David Perry, defence and foreign policy analyst for the Canadian Global Affairs Institute.

Trudeau said that’s what he’ll be speaking about with other leaders.

Russian President Vladimir Putin offered Ukraine’s aspirations to join NATO as one of the justifications for the invasion.

Stoltenberg said leaders had approved a new strategic concept that will guide the defence of the alliance for the next decade, which identifies Russia as a serious threat to NATO.

The paper adds members “cannot discount the possibility of an attack against allies’ sovereignty and territorial integrity.”

NATO leaders also extended a formal invitation for Finland and Sweden to join the alliance, and promised a new package of assistance for Ukraine, including secure communications, body armour, anti-drone weapons.

Russia has launched fresh attacks on civilians in the country — most recently with a missile strike on a shopping mall in Kremenchuk in central Ukraine Monday that killed at least 18 people.