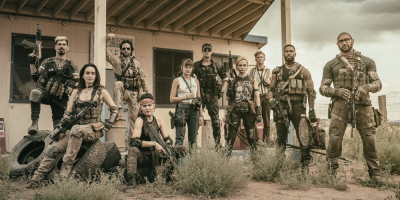 Known for bringing some of the best over-the-top action to life, Zack Snyder (300, Man of Steel) is genre-mashing two things we never thought we ever wanted to see together: Zombies and heists. Now that we have though, we’re definitely in.

Starring Dave Bautista (Guardians of the Galaxy, Stuber), Army of the Dead follows a group of mercenaries who must venture into quarantined Las Vegas after a zombie outbreak and pull off the ultimate heists. The catch, however, is that these zombies aren’t the mindless drones you’re used to seeing.

Zack Snyder is also no stranger to zombie films having helmed the 2004 adaptation of Dawn of the Dead and while it’s no masterpiece by any stretch of the world, it’s hard not to call it what it was meant to be, a fun popcorn flick.

Army of the Dead looks to be an exciting romp that doesn’t take itself too seriously and sometimes it’s just fun to turn your brain off and watch something easy, especially if there are zombies around.

It hits Netflix on May 21st.