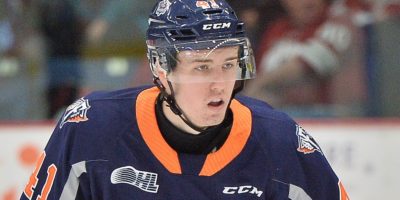 There were new faces in new places, but it was the same old result when the Barrie Colts took to the ice against the Sudbury Wolves on Thursday night.

After a couple of busy days on the OHL trade front, the new-look Colts returned to the task at hand and found themselves on the wrong end of a 4-0 score to their Central Division rivals at the Sadlon Centre.

Midhurst native Macauley Carson scored twice, Christian Purboo kicked aside all 25 shots he faced and Matej Pekar, in his first game against his former teammates after being dealt on Wednesday, added an assist in a strong performance to give the Wolves their fifth win in five games against Barrie this season.

“Tonight’s game was obviously a tough one,” Colts general manager Jason Ford said after changing the look of the team with a handful of trades ahead of Friday’s OHL Trade Deadline. “These games around the deadline are always a little bit different because players are thinking of different things, but we stressed to them that they really got to block all that out and play the game.

“For the first period we were OK, but in the second and third we were just average for the most part.”

Jack Thompson and Quinton Byfield also scored for Sudbury (20-18-1-0), which moved six points ahead of Barrie atop the Central standings.

Jet Greaves made 28 saves in goal for the Colts (16-18-2-1), who had a trio of new names in the lineup, including centre Evan Vierling.

The talented second-year centre, who was acquired earlier this week from the Flint Firebirds along with a pair of second-round picks for veterans Tyler Tucker and Riley Piercey, had a solid effort in his Barrie debut.

It was the first game action in over six weeks for the second overall pick in the 2018 OHL Priority Selection after he requested a trade from Flint and returned to his home in Aurora.

“I haven’t played in a while, so it took a bit to get my legs under me,” the 17-year-old said. “But considering I haven’t played, I felt pretty good.”

Vierling is happy to get a fresh start in Barrie.

“They have a lot of good players here,” he said. “They work hard and play fast and have a lot of skill, so I’m super excited and hope I can contribute.”

Vierling started the game on the second line between fellow newcomer Anthony Tabak and Aidan Brown. He posted two shots and created a handful of chances for himself and his linemates.

“There’s a couple of new faces that I was playing with tonight, so it’s definitely different,” said the six-foot, 176-pound forward, who had eight goals and 37 points in 75 games with Flint. “We’re going to bond pretty quickly here and the scoring is going to come.”

Ford was happy with what he saw from his talented young acquisition, especially after missing so much time.

“He’s got lots of skill, he’s smart and plays with a good pace,” he said of Vierling. “He had a few shots on goal tonight, made some good plays. He’s going to be a good player in this league, for sure.

“He’s still young and has lots of untapped potential, but he’s going to be a real good player and we’re happy we got him.”

The Colts targeted the young forward in trade talks.

“You look at all kinds of scenarios and a lot of them don’t play out, but you got to go through them all,” Ford said. “When we went thought everything through, the fact is we really wanted to get a good centreman like him and we got him. He’ll be an exciting player to watch the next few years.”

It’s been a busy few days for Ford and his management team as OHL transactions show. Along with Pekar, Tucker and Piercey, the Colts also moved captain Jason Willms to London, third, fourth and fifth picks to Sarnia and a seventh to Guelph.

The return included Vierling, Tabak (Sarnia), overager forward Josh Nelson (London), goalie Tanner Wickware (Guelph) and a haul of draft picks with five second-round selections, a third, a fourth, a fifth and a sixth among them.

Shipping popular veterans like Willms, Tucker and Pekar is never easy, but Ford believes the deals should put the club in a better position moving forward and still be competitive this season.

“The way we looked at it is we can make some moves that fit into the future the next couple of years,” the Colts general manager said. “At the same time, we were four points behind Sudbury going into tonight’s game and we can do pretty well this year. We don’t want to drop in the standings.

“Basically everything we did was to restock lots of draft picks and bring in some young talent.”

Pekar, said Ford, had been an absolute solider for the club over the last two seasons, but the return was tough to pass up on. Especially with the Buffalo Sabres prospect expected to make the jump to pro hockey next season.

“Five picks in total for a European in his last year, it’s pretty good because obviously there’s a limited market where you can trade them,” Ford said. “It was a good return. Sudbury really coveted him because we play them eight times a year and they see what he brings. It’s a good deal at both ends.

“Obviously he wasn’t going to return to play for us next year and for them he’s a player they can put with Byfield and you saw tonight how he did. He did very well.”

The six-foot-five Tabak is a player the Colts liked dating back to scouting him in midget hockey. The 18-year-old should help ease the loss of Piercey somewhat upfront.

“Obviously a little bit different player than Piercey, but a big body that’s smart, has a good stick,” Ford said.

“He’s had a good year this year (eight goals and 27 points) in Sarnia,” he added. “There’s lots of ice time here, there’s lots of opportunity here for him and a lot of the guys here the rest of the year.”

With still a few hours Friday morning ahead of the noon OHL deadline and two-player cards remaining, Ford wasn’t sure if the club would be making any more moves, though he didn’t rule it out.

“It’s really hard to say if anything’s going to happen,” he said. “You never know with these deadlines, it’s hour to hour. We’re still a little short-staffed upfront with 12 forwards when we get everybody healthy.

“We’ll just have to kind of see here, circle back on some things and see what happens (Friday) morning.”

The Colts return to action Friday night when they hit the road to take on the London Knights. They close out a busy weekend at home Saturday against the Kitchener Rangers. Puck drop is 7:30 p.m.

ICE CHIPS: Rookie forward Trey Zagrzebski and blue liner Matthew Sredl returned to the lineup last night. . . The Colts lost overager Aidan Brown late in the first with an unspecified injury after he delivered a crushing hit. . . Barrie’s Nathan Allensen, for a spear on Pekar, and Brandt Clarke, for a slew foot, were both handed match penalties and tossed from the game in the third.

banner image: newly acquired Evan Vierling gave Barrie Colts fans a look at what’s to come in his debut with the team, Thursday night, against the Sudbury Wolves