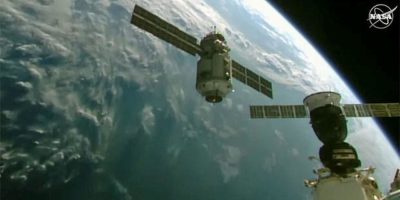 A heavyweight Russian laboratory module that experienced a variety of problems after launch last week docked at the International Space Station on Thursday. But in a moment of unexpected drama, inadvertent thruster firings briefly knocked the sprawling complex out of its normal orientation.

The gyros were unable to counteract the unwanted push from Nauka’s jets, and the space station, stretching the length of a football field with a mass of more than 930,000 pounds, began tilting away from its normal orientation.

Attitude control was quickly handed off to more effective rocket motors in the Russian Zvezda module, where Nauka was attached. A few minutes later, thrusters in a Progress cargo ship docked on the other side of Zvezda kicked in with additional muscle.

The space station ended up tilted up about 45 degrees from its earlier orientation, moving at one point at roughly half a degree per second. But in a little more than an hour, the station was back in its normal orientation, apparently none the worse for wear.

“We haven’t noticed any damage to the ISS,” Montalbano said in an afternoon teleconference. “One of the things we do after a dynamic event like this is go ahead and sit down with our structural loads team and review all the data, go pull all the telemetry and do an assessment. And so that’ll be the next step.”

A “spacecraft emergency” was declared at the outset, but that was standard procedure in such cases, giving the lab complex priority over other spacecraft using NASA’s satellite communications network. Montalbano said the station’s seven crew members were never in any danger.

“There was no immediate danger at any time to the crew,” he said. “Obviously, when you have a loss of attitude control, that’s something you want to address right away. But the crew was never in any, like, immediate emergency or anything like that.”

It’s not yet known what might have caused the Nauka module’s thrusters to suddenly begin firing as cosmonauts Oleg Novitskiy and Pyotr Dubrov were in the process of “integrating” the new spacecraft with the station’s computer systems.

Data indicating the station’s orientation in pitch, roll and yaw suddenly started changing. While the crew did not feel any shaking or vibration, the changing attitude was noted by computers in mission control and aboard the lab complex.

“Just to update you guys, right now we’re in a little bit of a tug of war between thrusters firing from both the SM (Zvezda) and the MLM (Nauka),” astronaut Drew Morgan radioed the station from NASA’s mission control center in Houston. “We’re sorting through the best course of action right now.”

A few minutes later, Morgan told the crew “the SM thrusters are effectively countering the MLM thrusters. We think at this rate, it’s going to take us about 20 minutes or so to get back in attitude control, but we’re going to get more insight when we get commanding back to MLM, which is still about an hour away.”

He was referring to the space station’s next pass over Russian ground stations, which allowed direct high-data-rate communications.

As a precaution, the station crew re-oriented NASA’s solar arrays to minimize any effects of rocket plume impingement. But a few moments, later Morgan added “we can report that the MLM thrusters are no longer firing. We’re back in attitude control, rates are stable.”

NASA flight director Zeb Scoville summed up his thoughts with a tweet: “Yeehaw! That. Was. A. Day.”

Earlier Thursday at the Cape Canaveral Space Force Station, a United Launch Alliance Atlas 5 rocket was rolled out to launch complex 41 for blastoff Friday to put a Boeing Starliner crew capsule in orbit for an unpiloted test flight to the space station.

The spacecraft’s maiden flight in December 2019 was marred by software problems that derailed a planned rendezvous and docking with the space station. The upcoming Orbital Flight Test 2, or OFT-2, marks a critical milestone toward certifying the spacecraft for astronaut ferry flights by the end of this year or early next.

But in the wake of Nauka’s unexpected behaviour, the Starliner launch was called off. The next available launch opportunity is 1:20 p.m. Tuesday, which would set up a docking around 3 p.m. Wednesday.

“We decided that it would not be smart to go launch the mission tomorrow,” said Steve Stich, manager of NASA’s commercial crew program. “We wanted to give the ISS program time to assess what had happened today, determine the cause and make sure they were really ready to support the Starliner launch and OFT-2 mission.”

The Nauka module was launched last Wednesday from the Baikonur Cosmodrome in Kazakhstan atop a Russian Proton rocket. The launching went well, but flight controllers quickly ran into problems with the module’s propulsion and navigation systems.

After several days of troubleshooting, Roscosmos, the Russian federal space agency, reported both problems had been corrected. That cleared the way for a Progress cargo ship to pull the two-decades-old Pirs airlock and docking compartment away from Zvezda’s Earth-facing port to make way for Nauka.

The Pirs undocking, originally planned for last Friday, went off without a hitch on Monday. The Progress MS-16/77P cargo ship and the old docking compartment plunged back into the atmosphere a few hours after undocking, and both burned up over the Pacific Ocean as planned.

Nauka, meanwhile, carried out additional rendezvous rocket firings before setting up for Thursday’s docking. While the maneuver went smoothly, it was not without last-minute drama.

Novitskiy, monitoring Nauka’s approach from a control station in the Zvezda module, was thought to have taken over by remote control as the arriving spacecraft moved within just 15 feet or so of the station.

But flight controllers later said the automated system was in control throughout, guiding the big module in for docking at 9:29 a.m. as planned. A few minutes later, hooks and latches engaged to firmly lock the lab module to Zvezda.

“Oleg, congratulations, that was not an easy docking,” a Russian flight controller radioed.

Novitskiy and Dubrov were working through procedures to tie the Nauka module into the Russian flight control system when the unexpected thruster firings began.

Nauka is similar to the Russian-built NASA-financed Zarya module, or FGB, that connects Zvezda to the U.S. segment of the station. The FGB-2 originally was intended as a backup for Zvezda, but construction was stopped in the 1990s.

Roscosmos then decided to convert the unfinished module into a multipurpose laboratory module, or MLM, providing a crew airlock, an experiment airlock, research facilities, another oxygen generator, a new toilet, expanded living quarters and a robot arm provided by the European Space Agency.

The module also is equipped with its own solar arrays, a complex propulsion system, propellant transfer equipment and an independent guidance and navigation system to help orient the station as needed.

Nauka’s launch was repeatedly delayed over the years by a wide variety of technical problems, but it finally was cleared for flight last week.

Up to 11 spacewalks will be needed to outfit the laboratory and to make multiple power and data connections with the space station. The first two excursions are planned for September.

feature image: the Russian Nauka laboratory module closes in on the International Space Station during the final stages of a carefully choreographed rendezvous. NASA TV