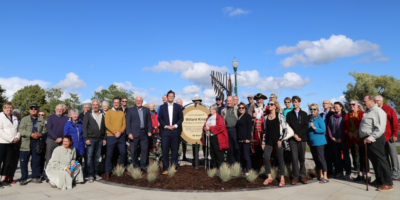 Mayor Jeff Lehman mentioned that Willard Kinzie’s words “Be Bold” were spoken more than often in council and now those words are part of the very trails he loved so much.

Mr. Kinzie served as Mayor of Barrie from 1957 to 1961, during which Barrie officially became a city in 1959. His passion and love for the city, our waterfront, and the people who live here, has echoed across time and has helped make Barrie one of the most beautiful cities in Canada.

Starting this year on September 26th, the day that would have been his 100 birthday, the Mayor will lead a walk around the waterfront in memory of Willard Kinzie and all he’s done for our city.