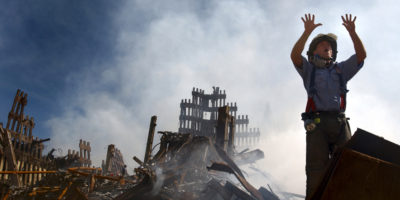 It’s been 18 years since the September 11 attacks left nearly 3,000 people dead in the worst act of terrorism the nation has ever experienced. On Wednesday, the 9/11 Memorial and Museum will commemorate the lives lost with a ceremony honoring those killed at the World Trade Center, Pentagon and aboard Flight 93 — as well as the 1993 World Trade Center bombing.

As has happened in years past, the names of those killed will be read during Wednesday’s ceremony. Last year, some families of victims infused their own, personal messages of remembrance, inspiration and concern.

During the ceremony at the 9/11 Museum and Memorial, the site will only be accessible to relatives of those killed in the September 11th attacks. That evening, a public ceremony featuring the public art piece Tribute in Light will open to the public as the sun sets. The Memorial plaza will also be open to the public from 3 p.m. to midnight.

The 9/11 Memorial and Museum is encouraging those commemorating the anniversary to use the hashtag #Honor911 on social media. The center is also providing resources for anyone interested in planning their own commemoration ceremony.