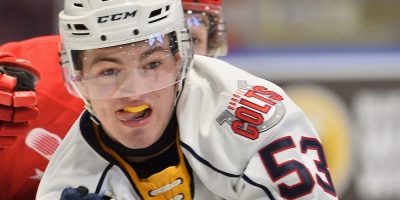 Beau Jelsma has decided he’s not going to attend the 2022 NHL Draft which is being held Thursday night and Friday at the Centre Bell in Montreal.

Instead, the Barrie Colts forward and NHL prospect is going to stay at home in Tillsonburg and watch the draft surrounded by family and friends.

After all, there’s work to be done on the farm.

“I want to stay home with my family and have everyone around me,” said the 18-year-old sitting in the cab of a tractor while collecting hay on the farm he works five minutes down the road from his home.

“That morning I got hay to cut. I’m going to get out there and do all my farm chores, and we’ll see what happens.”

Not a surprise for anyone who knows Jelsma. He’s never been shy about putting in a good day’s work and just like on the farm, Jelsma’s work ethic on the ice has been just as impressive.

Enough that he shot up the final NHL Central Scouting List, moving up to 88th from 137th in the midterm rankings.

That Jelsma has given himself the opportunity to hear his name called in this year’s NHL draft is still something he finds almost unreal.

“It started off with the OHL draft and that was a dream come true,” said Jelsma, who was a third-round pick of Barrie in the 2020 OHL Priority Selection. “I remember getting drafted and that was the best feeling in the world.

I learned a lot this year and I put myself out there and did what I could. I’m looking to develop my game as much as possible here.

“To get your name called in the NHL Draft, if it does happen, that would be a true honour. It would be every kid’s dream come true. Even to be talking about this at this time is super surreal for me, and I’m super excited.”

While his rookie season had to wait after the COVID-19 pandemic forced the cancellation of the 2020-2021 OHL season, it didn’t take long for him to make himself a fan favourite. A non-stop motor and a fearless attitude to go wherever needed on the ice to get the puck quickly drew attention to his blue-collar game.

As did his ability to put the puck in the net. Only Declan McDonnell, with 28, had more goals in a Barrie uniform last season.

His 27 goals placed him in the top five in rookie scoring.

The same work ethic that he brought with him to those long, hard days working on the farm was there with him every time he stepped on the ice with Barrie.

Which is why, along with teammate Hunter Haight, he’s among this year’s top OHL prospects for the NHL draft.

“He’s a heart and soul player. This is a guy that will just find a way to get it done,” Colts general manager and head coach Marty Williamson said of Jelsma. “He’s not sure if he’s going to the draft, but that’s not going to define him. He’s just going to keep working. He’s got work to do on the farm there.

“He’s just a coach’s dream. Both kids (Jelsma and Haight) are.”

Jelsma takes pride in his fierce determination to make something happen and make a difference.

“Once I get my mind on something, you’re not taking me off it,” said the five-foot-nine, 174-pound forward who had 47 points in 68 games. “I’m going to do what it takes to get it done. Like my dad said, ‘If you work hard, good things will happen.’ I just worked as hard as I could this year and worked smart.

“I just gave it my all every shift this year. As a young guy, you can’t take a shift off, or you might not be on the ice the next shift. In and out every game, I just played hard, and I found the back of the net a couple of times.”

When injuries and suspensions provided bigger opportunities up front, Jelsma took advantage. He earned the confidence of the coaching staff and was a fixture among the top-six forwards, rotating between centre and left wing.

“At the start of the year, I was very nervous stepping on the ice and once I started seeing the ice a little more I started to calm down and play my game,” he said. “I thought I really adapted quite well, and I was just grateful for the opportunity from everybody on the coaching staff. My teammates helped me out.

“Practices helped me out, changing a couple of things in my game, a couple of tips here and there. It was a great year, and I’m super happy to be part of such a great organization like Barrie and all the help that I’ve gotten this year, and I can’t wait for next season.”

“He played every game of the regular season for us, and he played a bunch of those games injured. It just took its toll on him, even the game we sat him out in he wanted to play in. The trainers came to me and there was just no way he could play in. He was in so much pain and was just a shell of himself, but he’s that kind of kid. You just can’t keep him out of the lineup. He wants to play. You say the name Jelsma, and a smile immediately comes to my face. He’s one of these guys that you’re happy to go to war with, and you’re happy he’s on your team.”

Jelsma’s game, mixed with his fiery competitiveness, often finds success come playoff time when things tighten up and there’s a battle for every inch on the ice.

The young Colt was anxiously looking forward to the first-round series with the Mississauga Steelheads, but Jelsma never really had a chance to play his game after he suffered a rib injury in the final game of the OHL regular season.

The injury hampered him in the playoffs and after not missing a single game in the regular season, he was forced to sit three of the six games in the playoff loss to the Steelheads.

The look on his face as he was forced to watch his teammates from the stands said it all.

“I got hurt there in the last game of the year, and it affected my game in a big way,” he said. “With my injury, I couldn’t get into the dirty areas, and it’s my game. I tried my hardest and gave it my all out there. I ended up missing a couple of games and I tried to come back, it just didn’t work out.

“I was heartbroken because through my life I’ve always been a huge playoff guy and going all season not getting injured and then getting injured when it really matters at the end of the year it was a little bit of a kick in the (private parts).”

Williamson felt for his young player, knowing just how much he wanted to play.

Jelsma has been looking forward to this day for quite some while, and he hopes some team will take a chance on him and his game like the Colts did.

“Whatever happens at the draft happens,” said Jelsma, who often gets up in the early morning hours to get in his training before heading out to the farm. “It’s not going to affect my game down the road. I’m just going to keep having the same attitude toward everything like I do.

“Even on draft day, I’m super excited and I hope I’m just going to go through the motions and whatever happens, happens. My goal is to get drafted and move on to the next step.”

One thing is certain, whatever happens Jelsma will be ready to get down to work.

The NHL Entry Draft starts at 7 p.m. with the first round on Thursday night and Rounds 2-7 will start Friday at 11 a.m.