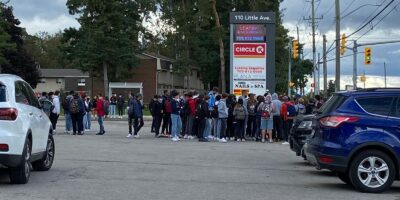 An incident near a Barrie high school on Thursday afternoon did not lead to any gathering size-related fines despite drawing a bit of a crowd.

Around 1:00 Thursday, police were called to a strip mall near a south Barrie high school with reports of a brawl between students. The subsequent crowd that gathered exceeded the province’s cap on outdoor gatherings of 25. Despite this, the Barrie Police Service didn’t lay any charges; the crowd scattered too quickly. “There were no youths charged upon arrival of the Barrie Police. The youths dispersed very, very quickly,” said police spokesperson Peter Leon. “In fact, our caller who reported it to us was still on the phone upon the arrival of police, and did report that the children were leaving the area very, very quickly.”

The fine for an individual violating the provincial cap on crowd sizes is $750. Leon says some of the kids involved could have been subject to this fine if they had stayed in place, depending on the circumstances. “We would have certainly had to look at the situation and assess what we were dealing with there,” he told Barrie 360. “The initial numbers were somewhere around 100. We now know that the group was a little bit smaller than that, but definitely in excess of 25.”

“I think the public needs to be aware that there are people watching, and they’re not afraid to let us know,” he continued. “We’re more than happy to respond and deal with the situation that we’re presented with.”

“Certainly as the numbers continue to rise, I think you’re going to see that the level of strictness does increase,” added Leon.