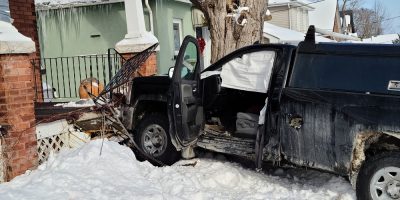 A driver has been charged with running a red light after a crash in Orillia that caused one vehicle to strike a house.

Orillia OPP were called to a home at the intersection of Colborne Street and Patrick Street on Tuesday with reports of a collision between two vehicles. The collision caused one of the involved vehicles to strike the front of a home.

Police say nobody was hurt in the collision.

One person has been charged with a red-light violation. Area roadways were closed for the duration of the police investigation but have since reopened.