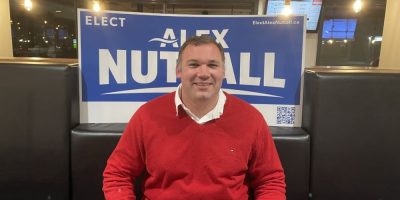 Alex Nuttall is returning to city hall, this time as mayor.

Nuttall won Monday’s municipal election, defeating long-time city councillor Barry Ward by fewer than 800 votes. Ward had represented Ward 4 and had been on council since 2000. Former County of Simcoe Warden and Penetanguishene Mayor Gerry Marshall finished third, followed by Mike McCann, who had been a two-term councillor in Ward 10, then Andrew Gordon, Weldon Hachey and Rob Haverson.

This will be the first time since 2010 that the person sitting in the mayor’s chair isn’t Jeff Lehman, who decided not to seek a fourth term.

“These things don’t just happen, they take work, and effort, and time,” said Nuttall post-election Monday night in front of media and a crowd of supporters at Pie Wood Fired Pizza Joint.

Nuttall, a former Conservative MP in the riding of Barrie-Springwater-Oro-Medonte, promised to hold the line on taxes and push to end the prison release program where inmates from the Central North Correctional Centre are dropped off at the Barrie bus terminal.

There will be four new faces around the council table — Craig Nixon in Ward 2, Amy Courser in Ward 4, Nigussie Nigussie in Ward 6 and Bryn Hamilton in Ward 10. There were no incumbents in either of the wards.

All incumbents who ran will be back at city hall including Clare Riepma (Ward 1), Ann-Marie Kungl (Ward 3), Jim Harris (Ward 8) and Sergio Morales (Ward 9).

Robert Thomson in Ward 5 and Gary Harvey in Ward 7 were acclaimed.

In terms of where he would like to see the city go from here, Nuttall says there needs to be a collective attitude for progress.

“This isn’t a one-man show,” Nuttall said. “This is a team approach to governance. And that’s what we’re going to have around the council table … I’m a big believer that you empower people to do work where they want to, because that’s where you’re gonna get the most out of them, where they’re going to have the greatest benefit to the City of Barrie.”

This election was the first time residents could vote simply by casting a ballot over the phone or on the internet, and the results were released all at once.

Nuttall says it was nice to have definitive results right away, but needs input from citizens on their experience.

“I think we should be striving every day to make sure that we can increase the number of people that are participating in the democratic process on the municipal level,” said Nuttall.” And that’s a conversation council needs to have with staff and certainly professionals in this field, and figure out going forward what works.”