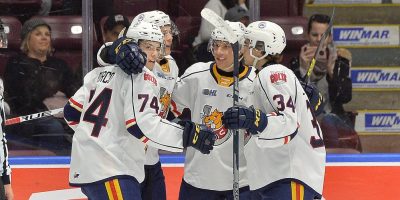 The Ontario Hockey League applied the brakes, Thursday, on any talk of a plan for a return to play this season.

This after reports surfaced the Barrie Colts and other OHL teams would soon be meeting to go over a plan which included a 24-game season and begin in early April, with teams playing out of four hub cities.

Regardless of any possible plan or petitions signed by parents urging the league to start, Marty Williamson, the Colts’ senior advisor to the director of hockey operations, points out that any return to the ice will first and foremost be determined by COVID-19 and provincial government protocols.

“We’re working our butts off to hopefully have something, but there’s a point you got to be realistic in this situation here and that health and safety is the most important thing,” he said. “I know parents are sending petitions and that, but the government has got to give us the OK before we do anything.”

While the major junior league is anxious to get started and players are eager to get back on the ice, OHL Commissioner David Branch said the work toward ensuring a safe return to play for everyone continues.

“We are encouraged by our ongoing discussions with the (provincial) government and Public Health agencies, but have not yet arrived at an approved Return to Play framework for the coming season,” he said. “The (OHL) will share more information with our players, families, staff, billets and tremendous fans as a finalized plan for a safe return to the ice becomes available.”

While there’s no question players want to come back, Williamson knows it’s still a “scary situation” out there.

“We’ve got players in Europe playing and they’re all calling me going, ‘Do I get on a plane back,'” Williamson said, laughing out loud about their excitement. “It’s kind of, ‘Hold tight now, guys.'”

“We’re all going a little stir crazy,” he said. “We’d all love to get back into practices and games, but we also know it’s a little unrealistic. We can hope all we want, but you really do have to sit back here and do the right thing and let it play out.

“If we can get the bubble and play some games. . . but I think we’re a ways out from doing those kinds of things.”

Williamson reminds everyone not to get too high or low when hearing about any talk or rumours about a Return to Play plan and possible start date. The pandemic has already forced the junior league to delay three planned start dates.

Even with this latest talk, a lot can change between now and April.

“I know the league responded today and I thought that was great of Dave and (vice-president Ted Baker) in representing us, just to settle everybody down,” Williamson said. “I know it stopped my phone from ringing a little bit.

“We need more time. That’s the bottom line and we’ll go from there.”