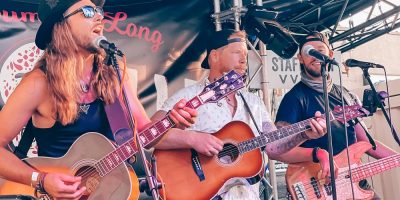 A concert benefitting victims of last month’s tornado was not only among the first the city’s seen since COVID restrictions were relaxed, but it also raised at least five thousand dollars.

Local musician Brian Harwood was spurred into action to organize the fundraising effort after seeing the storm damage up close. “The tornado hit my street on Prince William Way and I saw firsthand the damage and everything it did, and I just wanted to put a fundraiser together to raise money to help people in need,” Harwood told Barrie 360.

“I was lucky. It just missed my house,” he added. “It just pushed me to call up some of my friends and my buddies, other musician, friends, and just put something on that could help raise money for the community.”

Harwood and several musicians got to work organizing a show at the Taco Alley patio on Collier Street and says not only did it go off without a hitch, but it also went better than expected. “It went amazing. So much better than I had planned or hoped,” he said, adding upwards of 300 people turned out for the show over the course of the day.

While Harwood and company continue to tally up the proceeds of Sunday’s show, he says they’ve raised at least $5,000. All proceeds will go towards the Salvation Army’s tornado relief fund.

Harwood says he’s also been asked to perform at another upcoming fundraising concert at the same venue. Barrie Live Music Shows is organizing a show at Taco Alley on Tuesday, August 17, to raise funds for Barrie Families Unite.