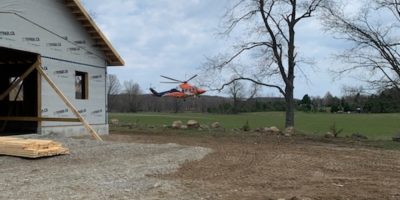 One person is in local hospital, another has been airlifted to Toronto after a building collapse at a job site in Oro-Medonte.

Oro-Medonte Fire Chief Hugh Murray tells Barrie 360 a new horse barn being constructed at the 2nd Line near 30/31 Sideroad, north of Old Barrie Road, collapsed around 10:30 a.m. Tuesday. He says fire crews from Station 3 in Horseshoe Valley and Station 6 in Moonstone responded, as did police and County of Simcoe Ambulance.

Murray confirms one worker was airlifted via Ornge to a Toronto trauma centre for treatment of serious injuries, while another was taken to Royal Victoria Regional Health Centre in Barrie for treatment of minor injuries.

The Ministry of Labour is assisting Ontario Provincial Police with the investigation.