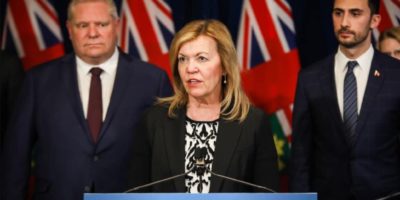 With the new Omicron COVID-19 variant detected in Ontario, the province’s health minister said on Monday, there is consideration being given to expanding third dose eligibility to more age groups.

Health Minister Christine Elliott said she will have “more to say later this week.”

Ontario has a supply of 3.8 million doses of COVID-19 vaccine.

“We are urging more Ontarians to please come forward and be vaccinated, and we’re also looking at other age groups for the booster,” Elliott told reporters. “We’ll have more to say about that later in the week because we want to have that extra layer of protection.”

The new variant was first detected in South Africa.

Earlier on Monday, health officials said there are two confirmed cases of the variant in Ontario -both among individuals who returned to Ottawa from Nigeria. Four other cases are being investigated – two more in Ottawa and two in Hamilton.