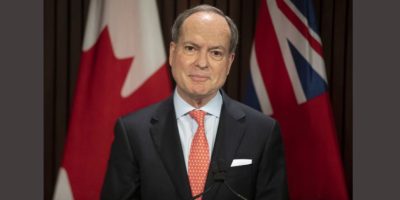 Ontario’s Progressive Conservatives are veering off a path to balance with an election budget loaded with billions of dollars in hospital, highway and transit investments.

The document, set to serve as the Tory platform during a campaign expected to kick off next week, has the party projecting Ontario will be $19.9 billion in the red this year – a bigger deficit than the province ran in the first pandemic year. The Progressive Conservatives aren’t planning to balance until 2027-28.

That’s despite Ontario’s Financial Accountability Office saying recently that the province was on track to balance the budget by next year.

Finance Minister Peter Bethlenfalvy defended the deficit and the whopping $198.6 billion budget, saying now is the time to invest and rebuild.

“Sparing no expense during the pandemic was the right thing to do,” he said.

“Rebuilding Ontario’s economy today is the right thing to do in a fiscally responsible way, which we demonstrated in this budget.”

In this government’s pre-pandemic life, it was focused on tightening purse strings – with “finding efficiencies” a key 2018 campaign refrain – and it came under sharp fire in 2019 when that year’s budget made sweeping program cuts that were only revealed following the tabling of the document.

The government had also managed to chip away at a large deficit necessitated by COVID-19 spending in the first year of the pandemic, lowering it from $16.4 billion in 2020-2021 to $13.5 billion in 2021-22. Those amounts also came in well under initial projections.

But now, the Tories are planning to sink the province further into deficit, with program spending growing by an average of 5.1 per cent for the next three years, higher than the 4.2 per cent average of the past 10 years. It’s fuelled in large part by major funding commitments for infrastructure.

The government has pledged $158.8 billion over 10 years for projects such as hospitals, highways and transit, including $20 billion this year alone.

In the weeks leading up to the introduction of the budget, the government announced more than $2 billion in funding for various hospital projects and a plan to spend $1 billion over three years on home care.

Proposed highway projects announced in the budget include a new twin bridge over the Welland Canal on the Queen Elizabeth Way,  widening Highway 401 in eastern Ontario starting in Pickering, Ont., and Oshawa, Ont., widening Highway 17 from Arnprior, Ont., to Renfrew, Ont., and reconstructing a stretch of Highway 101 in northern Ontario.

The document contains few new pocketbook goodies, especially compared to the party’s 2018 platform, which promised lower hydro bills, an income tax cut, lower gas prices and buck-a-beer – though not all of those were accomplished.

A budget section on “keeping costs down” is largely built on previously announced measures, including cutting the gas tax by 5.7 cents a litre for six months starting July 1, expected to cost $645 million, reaching a deal with the federal government to provide $10-a-day on average child care by 2025, and eliminating and refunding licence plate renewal fees back to March 2020, at a cost of $1.8 billion.

Two new affordability measures are a proposed Ontario Seniors Care at Home Tax Credit, which will give recipients up to 25 per cent of eligible medical expenses back up to a maximum of $1,500, and an enhancement of Ontario’s Low-income Individuals and Families Tax Credit.

The Tories propose to raise the amount under the low-income tax credit from a maximum of $850 to $875 and allow more people to qualify. Currently, the benefit is phased out at a rate of 10 per cent for an individual’s income above $30,000 up to $38,000 and the government proposes to lower that phase-out rate to five per cent, which would see people making up to $50,000 qualify.

It is estimated that 1.1 million lower-income workers would see an additional average of $300 in tax relief for 2022, with the measure expected to cost an additional $320 million.

NDP Leader Andrea Horwath said she was skeptical of the big spending promises.

“Doug Ford is going to go right back to cutting the minute this election is over if we give him the chance,” she said.

“This document is completely lacking in the kind of ambition that I know that the people of Ontario have for our province and want to see for the future of our province,” he said.

Green Party Leader Mike Schreiner said this is “a pro-sprawl, anti-climate budget” that will undermine the protected Greenbelt by running highways through it.

Bethlenfalvy touted a previously announced plan to invest in mining critical minerals in the north to provide materials for electric vehicle batteries manufactured in the south of the province.

“That is our green plan,” he said.

This report by the Canadian Press was first published April 28, 2022