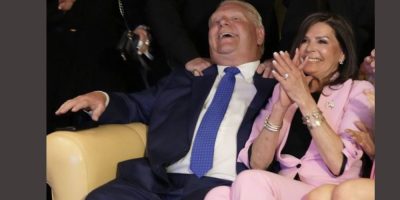 By Allison Jones and Holly McKenzie-Sutter in Toronto

Doug Ford and the Progressive Conservatives sailed to a second majority government Thursday, kept afloat by an electorate unenthusiastic about change and a decidedly safer campaign than when he burst onto the Ontario political scene four years ago.

It was a victory that also saw the resignations of the two other major party leaders in its wake.

Ford’s campaign lacked the pizzazz and bombast of 2018, with buck-a-beer promises traded for more staid infrastructure plans. But the COVID-19 pandemic also ushered in a different approach for Ford.

His first two years in particular were marred by controversies and chaos, from patronage scandals to program cuts that were later reversed, overnight sessions of the legislature and protests on the lawn.

But when the pandemic hit, he appeared more disciplined and serious at daily press conferences than in the past, listening to expert advice.

While many were critical of Ford’s response – at times appearing to favour large businesses over small ones, successive school closures, and resisting calls for a comprehensive paid sick day program – it was an overall benefit to him, public opinion polls show.

Ford thanked supporters new and old in a victory speech Thursday, shouting out auto workers, miners, students and newcomers who he pledged to support with jobs and investments into the future.

He also recognized his rivals in the opposing parties and thanked new Tory supporters who may have voted for the NDP or Liberals in the past, noting that he and his party had to build bridges to stay in power with unions and others who didn’t traditionally support his party.

“It wasn’t easy, we had to admit our mistakes, we had to build back confidence, and that journey, it’s not over,” Ford said.

“I’m the first to admit that there’s more work to be done, but tonight’s result, it proves that we’re on the right track, that this approach is the right one.”

Promises of new highways and hospitals centered Ford’s “get it done” pitch, seeking to turn the page on the pandemic by building the economy, though his budget-turned-platform didn’t contain much else in the way of new pledges for the next four years.

But a steady hand on the tiller may have been what voters were looking for just as the province hopefully emerges on the other side of the pandemic, in which everyone’s lives were upended for two years.

Wayne Petrozzi, a politics professor at Toronto Metropolitan University, said the public was traumatized from COVID-19 lockdowns and deadly nursing home outbreaks and didn’t want to revisit them, which fit with the PCs priority to “change the channel.”

“They were able to actually run a campaign where they didn’t ever have to stop and explain what happened,” he said.

The Progressive Conservatives were elected or leading in 83 of the province’s 124 ridings, well beyond the 63 required for a majority and ahead of the 76 they won the last time.

The NDP was poised to form Official Opposition again, leading or elected in 31 seats, the second highest number, though well back from the Progressive Conservatives and behind their 2018 result.

Andrea Horwath stepped down as NDP leader after 13 years and four general elections at the helm.

“I’m not shedding tears of sadness. I’m shedding tears of pride,” she said in an emotional speech Thursday night. “Together, my friends, we have built a party that is stronger and more ready to govern than ever before.”

Some key losses for the NDP to the Tories included Timmins, a region Gilles Bisson had represented since 1990, all three Brampton ridings they won last time, and the southern ridings of Essex and Windsor-Tecumseh.

The Liberals were elected or leading in just eight ridings, only one more than they won in their historic defeat of 2018. Leader Steven Del Duca, chosen as leader just two years ago, lost his own riding of Vaughan-Woodbridge and resigned as leader, despite vowing a day earlier to forge on in the event of that result.

“To be clear this isn’t the outcome that we had hoped for and worked for,” Del Duca said.

The Liberals were poised to fall short of the 12 required for official party status in the legislature. They managed to pick up Beaches-East York and Kingston and the Islands from the NDP, but did not win back former Liberal ridings such as Ottawa Centre or Toronto Centre.

Green Party Leader Mike Schreiner was re-elected in Guelph, but the Greens did not pick up Parry Sound-Muskoka as they had hoped.

Independent candidate Bobbi Ann Brady was elected in Haldimand-Norfolk, a region Toby Barrett represented for the Progressive Conservatives since 1995. He did not run this time.