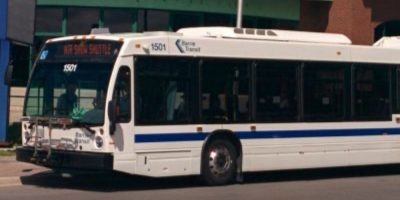 Most remaining mandatory mask rules in Ontario, including those requiring that people wear masks when riding public transit or visiting hospitals, will expire on Saturday.

Dr. Kieran Moore, the province’s chief medical officer of health, said Wednesday that he made the decision based on high vaccination rates and improvements in the provincial COVID-19 situation.

In a written statement, he thanked residents for following public health measures and asked for sustained vigilance against the virus by keeping up with vaccinations and staying home when sick.

“The province will continue to monitor for any significant changes, including any new variants of concern, to ensure we are adapting our response to protect the health and safety of all Ontarians,” he said.

Rules requiring that people wear masks on public transit and most health-care settings will expire at 12 a.m. on Saturday. Mask requirements lifted in most other settings in March, along with essentially all other public health measures aimed at stemming the spread of COVID-19 in the province.

However, masks will still be required in Ontario long-term care homes and retirement homes after Saturday, a decision Moore said is meant to protect the most vulnerable.

The province said organizations can keep their own mask policies and people should keep masking if they are high-risk for the illness, are recovering from COVID-19, have symptoms or have been in contact with someone who has the illness.

Directives around mask requirements for health workers will also expire on Saturday and be replaced by Health Ministry guidance outlining when masks should be worn in hospitals and other health workplaces.

Some hospitals indicated Wednesday that they would keep masking policies in place.

A spokesman for Hôtel-Dieu Grace Healthcare in Windsor, Ont., said the hospital intends “to continue with the mask mandate which includes the requirement for everyone to have a mask on in our hospital at all times.”

Two other hospitals in the region, Windsor Regional Hospital and Erie Shores Healthcare, also said they would keep masking rules for all visitors, staff and most patients, to protect elderly and immune-compromised patients.

“We treat some of the most-immune compromised patients, and we are committed to providing the safest possible environment for everyone in the hospital,” spokeswoman Gillian Howard said.

Toronto’s Hospital for Sick Children said it would also keep a universal masking policy after Saturday due to its “uniquely vulnerable patient population” with children that are immunocompromised and not all eligible for vaccination against COVID-19.

A spokesperson at Royal Victoria Regional Health Centre in Barrie told Barrie 360 that a decision about masking will be made by Friday and details would be provided then.

The Toronto Transit Commission, which operates public transit in Ontario’s most populous city, said masks would remain mandatory for staff and customers on its Wheel-Trans accessible transit service, and are still strongly recommended for those riding the wider system.

Ontario’s daily COVID-19 case tally is considered an undercount after the province restricted gold-standard PCR tests in December, but as of Wednesday, there were 1,013 new virus cases reported.

The seven-day average for new infections was 794, a number that’s been steadily decreasing since late April. There were 522 people hospitalized with COVID-19 as of Wednesday in Ontario, including 114 people in intensive care.

– with files from Allison Jones

-with files from Barrie 360

This report by The Canadian Press was first published June 8, 2022.