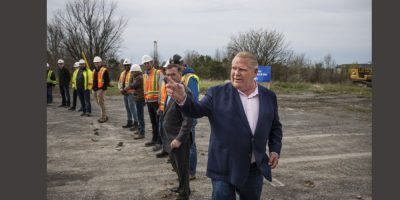 By Holly McKenzie-Sutter in North Bay, Ont., and Nicole Thompson in Toronto

Health-care, housing and highways were the major topics Ontario’s main political party leaders sparred over on Tuesday as they squared off for the first time during the campaign in a debate about northern issues.

Progressive Conservative Leader Doug Ford, Liberal Leader Steven Del Duca and NDP Leader Andrea Horwath — joined on stage for the first time by Green party Leader Mike Schreiner — offered their own solutions for the northern region and attacked each other over their records and vision for the province’s future.

Ford, campaigning for re-election as Tory leader, was at times pounced on by all three over his management of the deadly pandemic and overdose crisis.

Ford said he was “shocked and disappointed” by criticism from other leaders that his government ignored science and didn’t collaborate in response to COVID-19. He pointed to moves to boost domestic PPE production and hospital capacity, and said he had regular discussions with municipalities about the battle against COVID-19.

Del Duca and Horwath also noted that Ford was repeating past promises from 2018, including a pledge to bring back the Northlander rail service in northern Ontario that went unmet after he was elected.

“‘I’ve stood here so far this afternoon and I’ve heard Mr. Ford talk as if he hasn’t served as Ontario’s premier for the past four years,” Del Duca said.

The rail line that was cancelled in 2012 became a flashpoint for the leaders to target both Ford and Del Duca: Ford for not keeping his promise, and Del Duca for both belonging to the party that cancelled the service and not bringing it back when he was transportation minister.

Del Duca was Ford’s main target during the debate, but the Tory leader also framed Horwath’s New Democrats as supporting Liberal positions and not doing enough to build highways and other infrastructure that are centerpieces of the Tory platform.

“You have a lot of choices, a lot of options, in this election,” Ford said. “You’re going to either choose the Liberals that want to take us back, or you can vote for the NDP that want to hold us back. But if you want to get it done, you have one choice, and that’s the Ontario PCs.”

Highway repairs and construction have been a major theme for Ford during the campaign, and the topic dominated again on Tuesday.

Del Duca accused Ford of prioritizing the costly Toronto-area Highway 413 project — which the Liberals, NDP and Greens all oppose — instead of spending money on northern needs.

The Liberal leader was also a target of both Ford and Horwath for his time in former premier Kathleen Wynne’s cabinet. During a volley over road safety on northern highways, Ford suggested Del Duca was responsible for their state of disrepair and painted him as unworthy of a second chance.

“Mr. Del Duca, you had your opportunity and you failed,” he said. “You were the minister of transportation. You didn’t build absolutely nothing.”

Horwath also suggested Del Duca’s record was tainted by his history with the former Liberal government.

“He wants to say that they’re a new party now, and I get it. He doesn’t want anybody looking in the rear-view mirror because they left a wreck back there in northern Ontario,” she said, positioning her party as an alternative to the Liberals and PCs. “Doug Ford has had for years and things have gotten worse.”

After the debate, Del Duca told reporters that he thinks voters want to hear leaders explain how they will tackle issues, not “relitigate decisions from 10 years ago or 15 years ago.”

“I think elections are about the future, not about the past,” he said.

Schreiner, the only member of the Green party who’s ever won a seat at the Ontario legislature, largely avoided attacks from other leaders — who at various points openly agreed with his proposals.

Schreiner was the sole leader who highlighted the need for plans that account for climate change in many of his answers. He also weighed in on the need to regulate short-term vacation rentals —a topic that offered a springboard for the leaders to talk about affordable housing.

Ford didn’t draw the same connection between short-term rentals and housing prices, instead focusing on the added income they bring to homeowners and business vacationers bring to northern communities.

Del Duca and Horwath also took aim at Ford’s record on mental health, while he defended his actions.

Horwath said an NDP government would create a more fulsome system to address the opioid crisis.

Ford was the only leader who didn’t stay to take media questions after the debate — which was noted and criticized by his three rivals.

“It just appears that the Conservative campaign strategy is to avoid being held accountable,” Schreiner. “He’s avoided that throughout much of his time at Queen’s Park and it continues to the campaign. I think the people of Ontario deserve better.”