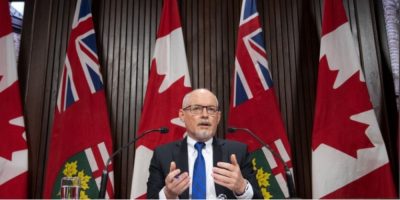 Ontario’s chief medical officer of health says he will be recommending that the province extend remaining mask mandates – in settings such as hospitals, long-term care and public transit – for another four weeks.

Dr. Kieran Moore told The Canadian Press in an interview today that he will be submitting that proposal to the government, and he believes it will help protect people living and working in vulnerable sectors through the worst of the sixth wave.

Premier Doug Ford said earlier today he would have “no problem” extending the remaining mask mandates beyond the current expiry date of April 27 if that’s what Moore recommends.

The comments come as data from the province’s pandemic advisers suggest that COVID-19 transmission may have peaked, but it’s too soon to say for sure.

The Ontario COVID-19 Science Advisory Table’s latest modelling, released today, notes that the province is “well into wave six of the pandemic” spurred by the infectious BA.2 Omicron subvariant, waning immunity and the lifting of most public health measures.

The expert group says it’s unclear if the apparent crest in cases during the sixth wave will be followed by an increase, a decrease or a continued plateau after the long weekend.

Exact case tallies are unknown after the province limited access to PCR tests in December, but the expert group has drawn estimates from wastewater across the province’s 34 public health units.

The new modelling suggests hospitalizations and ICU admissions will continue rising, with timing and height of the peak uncertain. But the group noted that it’s unlikely they will reach levels seen earlier this year during the fifth wave.

Estimates for hospital occupancy range from just over 2,500 hospitalized patients to around 4,000, possibly peaking in the middle of May.

As for ICU occupancy, the group presented a range of scenarios from around 375 people in intensive care due to the virus or close to 650 people.

There is also “significant uncertainty” around deaths and health system impacts from the current wave, the expert group said, especially as health-care workers fall ill in significant numbers.

COVID-19 infections among health-care workers are as high as they were during the Omicron wave, the group said. That, combined with rising hospitalization numbers, may impact health-care capacity and the province’s ability to care for non-COVID patients.

The projections came as Ontario reported 1,392 people in hospital with COVID-19 on Wednesday and 177 in intensive care, compared with 1,332 hospitalizations and 182 people in ICUs the previous day.

There were 4,589 new infections reported, with limited access to PCR tests. The science table’s scientific director has said wastewater surveillance suggests the province is seeing between 100,000 and 120,000 new daily cases.

Provincial officials including the premier and Moore have said the province isn’t planning to bring back policies like mandatory masks in other indoor settings to stem the rising tide of cases, and the government maintained that position Thursday following the modelling’s release.

A spokeswoman for Health Minister Christine Elliott said the projections on hospital and ICU occupancy shows that Ontario can manage the current wave of infections without changing its public health response.

“This confirms what Dr. Moore reaffirmed earlier this week – Ontario has the tools and capacity to manage this wave of COVID-19 without imposing additional public health measures or reinstating a mask mandate,” Alexandra Hilkene said in a statement.

“Ontarians should stay up to date with their vaccines, including boosters, and speak to a heath-care provider about what treatment options are available.”

Ford was also asked about the modelling on Thursday ahead of its release, and said he was hearing “positive information” about the wastewater signal appearing to peak, while still urging the public to take precautions.

“I truly believe everyone should continue to be cautious,” he said.