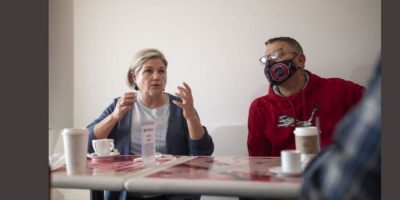 Paolo Dinola doesn’t really care who wins the provincial election so long as the next government tries to save others from the fate of his son, who became another statistic last year in Ontario’s surging opioid crisis.

“He was my beautiful boy, he always had a good heart, but got addicted to painkillers after a car accident,” Paolo Dinola said in an interview. “Three years later he’s dead from fentanyl – the system failed him.”

Opioid deaths and hospitalizations surged significantly across the province after the pandemic hit in early 2020.

The Office of the Chief Coroner shared data on Thursday that showed 2,819 people died from opioid toxicity in 2021. That’s up from 2,460 opioid deaths the year before – a figure that itself was up 58 per cent from fatalities recorded in 2019.

Both the NDP and the Liberals pledged to help tackle the opioid problem on Thursday while Progressive Conservative Leader Doug Ford said a few days earlier that he’d help anyone with an addiction problem.

Dinola was at a cafe in Paris, Ont., where NDP Leader Andrea Horwath made a campaign stop and pledged to reform the mental health system.

If elected in June, the New Democrats would expand access to safe injection and consumption sites, increase detox beds and call on the federal government to decriminalize illicit drugs, Horwath said.

“People are in a desperate space and folks who are experiencing addictions need to have some support to try to help them find a way out of that space,” Horwath said.

“It is deeply disturbing to see what’s happening,” he said of the opioid crisis. “We’ve heard from mayors, for example, right across this province about how challenging it is in each of their communities because they don’t have the funding in place.”

The Liberals also promise to lift the cap on new consumption and treatment sites.

In 2019, the Progressive Conservative government changed the addiction treatment model from safe injection sites to consumption and treatment services, which were billed as having more wraparound services. Fifteen sites were approved at that time, and a few existing overdose-prevention sites were forced to shut down.

The Tories capped the number of allowed sites at 21, but earlier this year approved the province’s 17th site, the first new one since 2019.

The Progressive Conservatives said in the unpassed budget that’s serving as their election platform that they would provide naloxone kits and training in high-risk workplaces to help reduce opioid overdoses.

The province spent $31 million on the centres, a PC spokeswoman said, plus $90 million they will spend to increase the number of addiction treatment beds.

Dinola said his son became addicted to opioids after injuring his neck and back in a car crash. The electrician popped Percocet for pain initially, but eventually graduated to fentanyl.

“The coroner said he had a lethal amount of fentanyl and meth in his system when he died,” Dinola said in an interview.

His son was diagnosed with schizophrenia and on several occasions was detained in hospital for psychiatric evaluations, Dinola said.

“I thought maybe in his mind, he’s probably been trying to self medicate to make himself better,” Dinola said.

His son’s wife left him before he died, Dinola said. Dinola helped raise his grandchildren and had one rule: no drugs in his house because he didn’t want it around the kids. But he said his son broke that rule several times.

Aaron Dinola couch surfed for several years and would sleep on park benches and on his front porch, his father said. His son became a petty thief, skipped court dates and found himself in jail on several occasions, including a 77-day stint last fall.

He got clean inside and was being treated with suboxone, which helps opioid addiction, and anti-psychiatric drugs, Paolo Dinola said.

“But they let him out without a prescription,” Dinola said. “They said it was his problem to get the medicine.”

At one point, when his son was supposed to be held at a local hospital under the Ontario Mental Health Act, he was released after eight hours, Dinola said.

An hour later, Aaron Dinola was rushed to hospital after a fentanyl overdose, which he survived.

Paolo Dinola said his son could never find a family doctor. He said he brought his son to the local emergency room on four straight days, but they kept telling him to come back the next day.

Over the last five years, 9,640 people have died due to acute opioid toxicity, the coroner’s data shows.

The next provincial government should focus on providing a safer supply of drugs if they really want to tackle the opioid crisis, said Lorraine Lam, an outreach worker with Sanctuary Ministries Toronto.

“We are seeing overdoses go up all the time. We haven’t really hit any sort of plateau,” she said.

“We’re also seeing the reality that it’s not just downers that are tainted now, it’s everything out there. It’s a bad supply.”

Tara Gomes, an epidemiologist at Unity Health, said there’s no urgency from either the province or the federal government.

Gomes said both levels of government need to relax rules on proven opioid treatments like suboxone and methadone, vast expansion of harm reduction, safe spaces to use drugs and decriminalize drugs.

“Even as we’ve seen these waves come and go with the pandemic, opioid-related deaths are just climbing year over year,” Gomes said.

“And this isn’t something that seems to be resolving any time soon.”

Ontario’s election is set for June 2.

Banner image: Paul Dinola looks on as Ontario NDP Leader Andrea Horwath speaks during a campaign announcement at the Dog-Eared Cafe in Paris, Ont., Thursday, May 12, 2022. THE CANADIAN PRESS/Nick Iwanyshyn

This report by The Canadian Press was first published May 12, 2022.