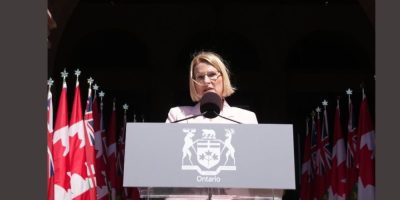 Increasing publicly covered surgeries performed at private clinics, waiving the exam and registration fees for internationally trained nurses, and sending patients waiting for a long-term care bed to a home not of their choosing are among the steps Ontario is planning in its efforts to stabilize the health-care system.

But critics say it’s not enough to immediately address the staffing crisis affecting the province’s beleaguered hospitals, some of which have seen emergency departments close throughout the summer for hours or days at a time.

The document indicates more of a role for privately delivered, but publicly covered services, with the government saying it will invest more to increase surgeries in pediatric hospitals and existing private clinics covered by OHIP. It is also considering options for further increasing surgical capacity by increasing the number of those procedures performed at “independent health facilities.”

Jones said Ontario needs to be “bold, innovative and creative” when looking for ways to improve the health system.

“There are some who will fight for the status quo no matter what,” she said at a press conference announcing the plan.

Jones did not directly answer a question about whether she would consider allowing more private clinics in Ontario.

“Health care will continue to be provided to the people of Ontario through the use of your OHIP card,” she said.

Ontario Health CEO Matt Anderson said private clinics will be used to address the surgical backlog, which worsened during the pandemic when hospitals cancelled thousands of surgeries to free up space for COVID-19 patients.

“Most important for us is, as we think about these services that can expand and can speed up reduction in our wait list, also doing it in a co-ordinated fashion where we’re not pulling staff from the public system into the private system,” Anderson said.

“So we have to balance that as we go forward.”

Neither gave examples of what private clinics would be used or what surgeries would be completed there.

Dr. Alan Drummond, co-chair of public affairs for the Canadian Association of Emergency Physicians and an ER doctor at a hospital in Perth, Ont., said the announcement does little to immediately help slammed emergency departments, which hospital officials have said is due to a severe shortage of nurses.

“We need to retain the nurses that we currently have in the emergency department, like, now,” he said.

“We got vague wallpaper promises that sound good, but mean nothing.”

“This is a blatant move that will line the pockets of investors, nothing more,” she said in a statement.

Hoy called it “puzzling” that the plan also outlines steps to support emergency department doctors, but not nurses.

“Dozens of emergency departments were closed over the past few weeks due to a shortage of nurses,” Hoy wrote.

“The government missed a huge opportunity here to bolster nurse compensation as a key to retention and recruitment to curb additional closures.”

The province will temporarily cover the exam, application and registration fees for internationally trained and retired nurses, saving them up to $1,500, and plans to invest up to $57.6 million over three years to increase the number of nurse practitioners working in long-term care homes.

The fee and registration changes were welcomed by Doris Grinspun, the CEO of the Registered Nurses’ Association of Ontario.

“Processing their registration is the real hiccup, which will be faster,” Grinspun said.

But she remains worried about the use of private clinics.

“We need to be assured that we’re not talking about for-profit entities that put shareholders first – patients must be first,” she said.

“The idea of supporting rural hospitals by staffing and mentoring by experienced physicians – that’s been tried in British Columbia has been hugely successful,” Drummond said.

In long-term care, the government introduced legislation Thursday that will allow patients awaiting a bed to be transferred to a “temporary” home while they await space in their preferred home.

“Ultimately, no, we are not going to be forcing anybody out of a home,” Long-Term Care Minister Paul Calandra said.

“The changes do allow us to continue that conversation to explain to somebody who is in a hospital why their needs can be met in a long-term care home.”

There are about 5,800 patients currently in hospital who could be sent to an alternate level of care facility if beds were available, said the Ontario Hospital Association.

NDP health critic France Gélinas was dubious about a patient’s ability to say no to the hospital.

“When the hospital tells you that you have to move, they have all the powers,” she said.

“The families do what they are told.”

The government is also planning to take 300 beds that had been used for COVID-19 isolation and make them available for people on wait lists. It says there is a potential to do that with 1,000 more beds within six months.

Banner image: Sylvia Jones, Deputy Premier and Minister of Health takes her oath at the swearing-in ceremony at Queen’s Park in Toronto on June 24, 2022. Ontario is set to announce a plan today to stabilize the health-care system as a staffing crisis continues within hospitals across the province. THE CANADIAN PRESS/Nathan Denette