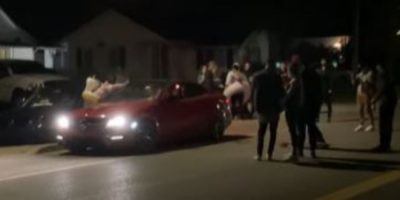 Yet another unauthorized car rally is expected in Wasaga Beach this weekend.

If you’re visiting #WasagaBeach this weekend, please expect an increased police presence and road closures. Respectful and lawful visitors are welcomed. The rules of the road will be enforced. If you choose to break the law, you may be charged. Please #DriveLegal. @WB_Media ^rs pic.twitter.com/tpi54Ie2xC

“The rules of the road will be enforced. If you choose to break the law, you may be charged,” police said in a Twitter post about this weekend’s event.

A car rally that roared into Wasaga Beach last month resulted in nearly 200 charges being laid, and one individual was arrested and charged for smashing windows of police cruisers.

On Thursday evening, OPP said in a media release that as a result of numerous ongoing investigations that 20 people have been charged with 37 offences which include 17 counts of dangerous operation of a motor vehicle and 20 counts of stunt driving. The accused range in age from 17 to 37 and reside across Ontario. Police say the charges are a result of incidents that took place over the weekend between Aug. 26 and Aug. 28 in Wasaga Beach.

The investigations continue and police say more charges could be laid.

“Under new stunt driving regulations, motorists can be charged for stunt driving in a parking lot, beach, park, bike path, or trail, farm field or sports field.” police said in the video.

In Huron County, OPP and officials in Goderich are also bracing for an authorized car rally this weekend.

“The Town of Goderich and Huron County OPP may temporarily close roadways to prevent illegal activities and disruptions. Should this happen, officials will work to restore the orderly flow of traffic,” police said in a media release.