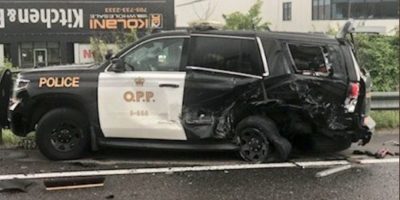 One person was taken to hospital Tuesday night after a car collided with an OPP cruiser parked at the side of northbound Highway 400 approaching Mapleview Drive.

OPP Sergeant Kerry Schmidt says an officer was assisting another driver whose vehicle had broken down, “As the officer was outside of his vehicle, speaking to the other motorist, another vehicle lost control approaching the area and slammed into the back and side of the stopped police vehicle.”

The officer and the driver being assisted were not hurt. The driver of the out-of-control vehicle suffered minor injuries.

Northbound lanes of the 400, between Innisfil Beach Road and Mapleview were closed for several hours.