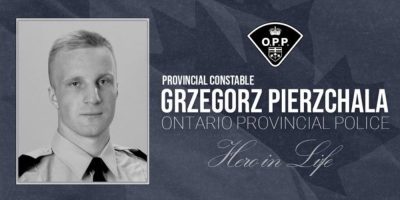 Ontario Provincial Police say two suspects have been arrested after an officer was shot and killed while on duty near Hagersville, Ont.

Const. Ed Sanchuk says a male and a female are in custody in connection with the shooting of an officer who was responding to a vehicle in a ditch in Haldimand County on Tuesday.

Sanchuk says no other suspects are outstanding though he did not say whether any charges have been laid.

OPP Commissioner Thomas Carrique says in a tweet that Const. Grzegorz Pierzchala was killed on Tuesday while serving in the line of duty.

It is with an extremely heavy heart that I regretfully advise that #OPP Provincial Constable Grzegorz Pierzchala was killed today while courageously serving in the line of duty. Our hearts are with his loved ones and all OPP members at this tragic time. #HeroesInLife pic.twitter.com/Chg9RKiYTt

Police said the 28-year-old officer had been with the OPP for just over a year.

Haldimand County OPP say in a video posted to Twitter that the shooting happened at 2:40 p.m.

Hours later, the OPP issued an emergency alert — which has since been cancelled — at 5:45 p.m. advising all area residents to remain in place as the suspect was believed to be armed.

The alert said they were searching for 25-year-old Randall McKenzie in a 2021 black Chevrolet pickup truck.

“Our hearts go out to the officer’s family, his OPP colleagues, and all first responders impacted by this horrific event,” said Haldimand County Mayor Shelley Bentley in a statement.

Anyone with information is being asked to contact Haldimand County OPP or Crime Stoppers.