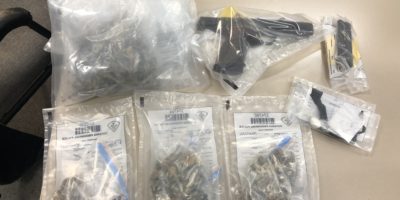 Orillia OPP charged three teens after a handgun was allegedly found in their possession.

.22 calibre Smith and Wesson handgun seized along with psilocybin, cocaine and cannabis by the #OrilliaOPP after an investigation during a traffic stop on #Highway400. 3 teens arrested and charged with firearms and trafficking offences. Another illegal handgun off the streets ^mh pic.twitter.com/rP84abUlfU

On Saturday, police stopped a vehicle for a traffic infraction. After further investigation police say they found psilocybin, cocaine and cannabis; along with a .22 Smith and Wesson handgun. A 15-, 17-, and 19-year-old have been charged with drug trafficking and unlicensed possession of a loaded firearm.

The two youths involved were released from custody with a court date of April 9th. The adult was released and will appear in court on April 6th.