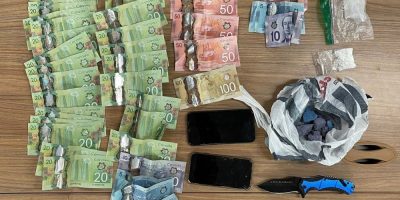 On Monday, June 27, just before noon, on West Street South, police say they conducted the stop and arrested the two occupants of the vehicle.

During the search of the men, officers say they located a prohibited knife, approximately 60 grams of fentanyl, over 12 grams of cocaine, and a large quantity of cash.

One individual was also found to be breaching release conditions from previous charges.

Both men, one from Toronto, and the other from Clarington, face multiple drugs and weapons charges.

One was held for a bail hearing on Tuesday, June 28, while the other was released on an undertaking and will appear in Orillia court in mid-August.