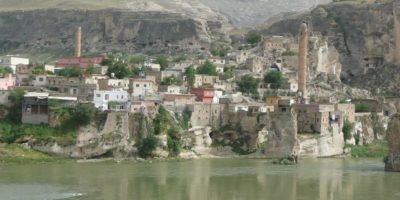 The clock is ticking for an ancient city in southern Turkey that is about to be left underwater. Despite an outcry from locals and activists, the 12,000 years of human history in Hasankeyf will be completely submerged when a reservoir behind the new Ilusu dam is filled over the next few months.

Hasankeyf, built on the banks of the river Tigris, is one of the oldest sites of human settlement in the world. The caves in the city date back to the Neolithic era, and some of the cave dwellings have continued to provide homes for locals until today. Civilizations that ruled over ancient Mesopotamia, the Byzantines, Arabs and Ottomans, all took turns leaving their mark on Hasankeyf over the millennia. The resulting landscape is nothing short of an open air museum.

The Ilusi dam and the Hydra Electric Power Plant to be powered by it were first devised in the 1950s, but legal battles meant ground wasn’t actually broken until 2006. The fourth biggest dam in Turkey, it will help fulfil the country’s energy needs and provide irrigation to the agricultural lands surrounding it. Once completed, the power plant will generate 4,200 gigawatts of electricity annually, similar in capacity to a small nuclear plant.

But residents say it all comes at a very high price.

The project will affect 199 settlements in the area and push thousands of people out of their homes and away from their livelihoods. The government has built a new town with 710 houses for the soon-to-be displaced, but some aren’t happy about the forced relocation.

Firat Argun’s family has lived in Hasankeyf for 300 years. His six children were born there, as was he. Within a few months, Argun will have to uproot his family and leave his small home to set up a new life.

“We were living with hope but we lost that now. They gave us three to five months,” he told CBS News. “I need to start all over again. I feel like I have just arrived in this world. I don’t know if it is going to be good or bad.”

Akif Ayhan, who has a small rug shop in the old city market, says there are infrastructure problems in the new settlement, and he expects an exodus from the area.

“If they force people out of the old market many people will declare bankruptcy,” he said. “It will cause major financial loss for the shopkeepers. We need an employment program but no such promise is made.”

Hasankeyf is also a popular destination for history and archeology enthusiasts. News of the imminent flooding drove half of a million people visit the city last year. Local authorities have said all roads leading to the old settlement will be blocked from October 8, and entry by any means will be banned.

The Initiative to Keep Hasankeyf Alive has brought together activists and 86 local and national organizations, fighting against the dam project. They argue that while the dam and power plant are expected to last 50 years, the cultural and environmental damage caused will be irreversible.

John Crofoot, an American who lived in Hasankeyf for several years, has been an outspoken critic of the dam project.

“What has always set Hasankeyf apart is its living heritage; the ways of life of the local people offer a window into how earlier residents of this fabled city have interacted with the surrounding environment,” he told CBS News.

Like many others, Argun is now worn out by the long fight. “We have been waiting like we are on death row,” he said. “In few months, we will meet our end. I wish God would protect anyone from such a destiny.”