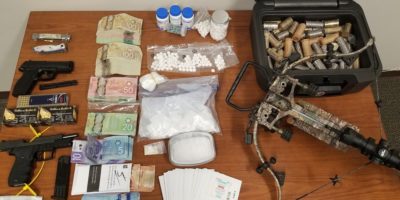 A month-long drug investigation has resulted in a raid of a Bracebridge home and the arrest of two suspects.

The OPP say, during the month of April, officers probed some drug dealing in Bracebridge. As a result of the investigation, two people were arrested outside a Depot Drive coffee shop, and a search warrant was executed at a Bracebridge home.

OPP report the search resulted in the seizure of about $33,000 in cocaine, over $31,000 in oxycodone pills, fentanyl patches with a street value of about $12,000, over thirty grand in Canadian currency, and a series of weapons including a crossbow and a loaded 9mm handgun. Police say an ATV that had been reported stolen earlier in the month was also recovered.

A 45-year-old man and 32-year-old woman, both of Bracebridge, are facing a long list of trafficking, weapons, and theft charges.