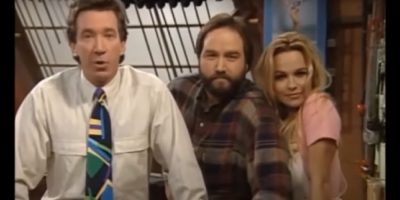 In her memoir, Love Pamela, Pamela Anderson alleges that Tim Allen once flashed her.

90’s kids will remember Anderson played the role of Lisa on the sitcom Home Improvement.

The gig was one of her first acting roles, and although it was a bit part, she was a series regular for two seasons before she jumped ship to Baywatch.

In her book, she says Allen quickly flashed her backstage on her first day on set.

Variety has published an excerpt from the book that reads:

“On the first day of filming, I walked out of my dressing room, and Tim was in the hallway in his robe. He opened his robe and flashed me quickly — completely naked underneath.”

“He said it was only fair because he had seen me naked. ‘Now we’re even. I laughed uncomfortably.'”

ET online reached out to Tim Allen, and he denied the claim saying, “No, it never happened. I would never do such a thing.”

Her memoir and Netflix documentary, Pamela, A love Story, are out on January 31.Check out the trailer below.