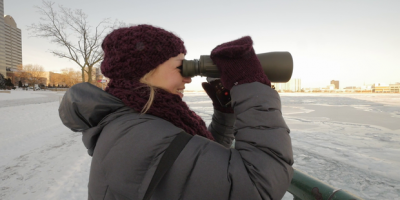 Scott Meyers and Karolyn Gagnier are in one of the shortest long-distance relationships in North America.

“We could literally wave at one another,” said Gagnier, who lives in Windsor, Canada. Meyers, her boyfriend, lives in Detroit, Michigan.

The pair has been dating for a couple of years. They used to see each other all the time, but the coronavirus pandemic closed all land border crossings to non-essential travel between the U.S. and Canada. The mile-wide waterway between them became an ocean.

Gagnier said she now has to drive four-and-a-half hours to the airport in Toronto to fly “literally back to where I had started that day to surprise him at work. That’s how much I love him.” They’ve gotten together a few times, but flights are expensive.

Both traveled to the Detroit River this week at the request of CBS News to show just how close — yet so far — they are.

“I miss our normal,” Gagnier said as the couple looked at each other through binoculars. She said she’s not interested in dating anyone else. “Scott is my person.”

Along our borders, there are thousands of couples like Meyers and Gagnier, stranded on separate shores, waiting for land crossings to open. CBS News shares their story in hopes that their curse illuminates your blessing — to be stuck at home with the one you love on Valentine’s Day sounds pretty perfect to them.

“We had a trip planned last March where Scott was going to ask me a very important question,” Gagnier said.

“What is your favorite color?” CBS News asked.

“Exactly. So I’m very much looking forward to Scott and I being able to finally travel where he can ask me in a very romantic manner what my favorite color is,” Gagnier said.