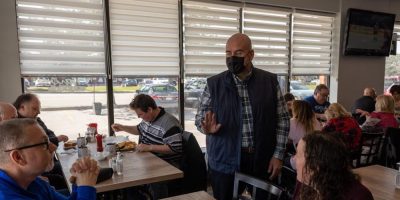 Three of Ontario’s four major political parties are promising to take steps to lower the price of food, but an expert says some of the main factors leading to rising costs are out of the province’s hands.

The issue of affordability has been top of mind for Ontarians throughout the election campaign, especially as more residents feel the pinch when purchasing produce and grocery staples.

Statistics Canada reported earlier this month that overall food costs rose 8.8 per cent compared with a year ago, while Canadians paid 9.7 per cent more for food at stores in April, the largest increase since September 1981.

The NDP, Liberals, and Greens are all offering targeted plans for tackling rising food prices, while the Progressive Conservatives say they will keep costs down and help residents save money through different measures like lowering gas taxes.

Liberal Leader Steven Del Duca said he’s seen firsthand how the price of food has “skyrocketed,” which makes it “so much more difficult” for Ontario households to be able to budget and support themselves.

If elected, he said his party would remove the 8 per cent provincial portion of the harmonized sales tax on all prepared food items under $20. The party has said it would fund the measure by introducing a one per cent surtax on companies operating in Ontario whose profits exceed $1 billion a year and increasing taxes on individual incomes over $500,000.

“So you go to your grocery store on the way home, maybe you pick up a rotisserie chicken or a side salad, as many families often do, bring it home for dinner. Every single time that it’s under $20, our plan will save you 8 per cent,” Del Duca said Sunday during a campaign stop in Windsor, Ont.

But Mike von Massow, an associate professor in the Department of Food, Agricultural and Resource Economics at the University of Guelph, said the plan wouldn’t provide “broad-based relief” since only a “small segment” of food products under $20 are currently taxed in the province.

The Liberals also propose legislating “fair and open negotiations” between food retailers and suppliers, which Del Duca said would drive prices down in the long−term.

“We want to make sure that … our local Ontario-based food suppliers can actually have a real shot at not only selling what they produce, but getting it done in a fair way,” he added.

The NDP and Greens have made similar pledges to back the Grocery Code of Conduct to improve transparency in the industry.

“We need to make sure that when we have retailers of food, particularly the big chains, that they’re not colluding to keep prices high, because it hurts consumers,” NDP Leader Andrea Horwath said Sunday during a campaign stop in Essex, Ont.

Von Massow said this could be a “very good thing in terms of controlling the market power of some of these big grocers,” but it wouldn’t necessarily lower grocery prices since a similar code of conduct introduced in Australia did not have that effect.

“As always, the devil is in the details. It’s easy to say, ’We’re going to do this,’ but until we see exactly what it is they do, it remains to be seen,” he said.

The Greens, meanwhile, are promising to provide startup funding and land for community−owned healthy food markets, community gardens, and rooftop growing spaces, as well as a nutritious school lunch program for the public school system.

They also say they would invest in research and innovation that improves the sustainability of how the province grows, produces, and distributes food.

Cost-saving measures proposed by the Progressive Conservatives, who are seeking reelection, include lowering the gas tax by 5.7 cents per litre, expanding the CARE tax credit for low−income Ontarians, and delivering $10 per day of child−care by 2025.

Despite the various campaign promises, von Massow said some of the root causes driving up food prices are out of provincial control, citing extreme weather events and the war in Ukraine as examples.

He noted Ukraine and Russia account for 30 per cent of the world’s wheat trade, and wheat prices have gone up as trade volumes decline.

Von Massow noted there has also been “significant” drought in the western parts of North America, including the Prairies. The result was a roughly 30−per−cent decline in western Canada’s grain crops last year, he said, adding it also had an impact on the beef industry.

There are also ongoing supply chain disruptions due to the COVID−19 pandemic that have driven food prices up, von Massow noted.

“What we now have is almost a perfect storm of factors that are leading to price increases for food items across the board,” he said.

“If we can’t deal with the root causes, then we have to deal with the prices themselves, and it will be very difficult without direct subsidization of certain staples to get food prices to come down. And it would be a very expensive thing to do.”

— With files from Jessica Smith in Essex, Ont.