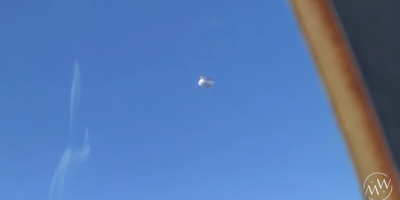 “I can confirm that the referenced photos and videos were taken by Navy personnel,” Department of Defense spokeswoman Sue Gough told CBS News in an email.

“As we have said before, to maintain operations security and to avoid disclosing information that may be useful to potential adversaries, DOD does not discuss publicly the details of either the observations or the examinations of reported incursions into our training ranges or designated airspace, including those incursions initially designated as [Unidentified Aerial Phenomena.]”

The Department of Defense established The Unidentified Aerial Phenomena Task Force to study videos like these and other unexplained sightings. Gough said the task force has included these incidents in their ongoing examinations.

The article posted on Mystery Wire claimed to have obtained information about “sensitive briefings prepared by the UAP Task Force.”

“The Task Force reports noted that the objects were able to remain stationary in high winds, with no movement, beyond the capability of known balloons or drones,” Mystery Wire reported.

The intelligence community is expected to publicly brief Congress on some of these sightings this summer after the Senate Intelligence Committee asked for more information on UFOs.