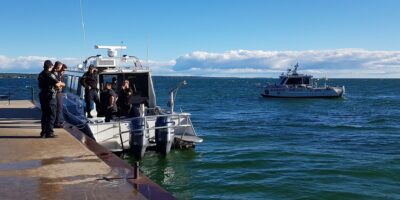 A boater faces thousands in fines in connection to a fatal incident on Lake Simcoe near Innisfil last year.

Transport Canada says it has handed down $6,500 in fines to the individual, claiming they were illegally operating a privately owned pleasure craft as an uncertified commercial tour boat. “These actions contributed to a fatal boating incident on Lake Simcoe, Ontario, in September 2020,” according to a statement from Transport Canada.

The pleasure craft was carrying paying passengers for a tour without proper certification, licensing, or required safety measures, according to Transport Canada. It was advertised as a tour boat online and hired by a group of friends for a tour of the lake on September 3 of last year. During the outing, one of the passengers, a 21-year-old from Scarborough, fell overboard.

First responders, including South Simcoe Police, Innisfil Fire and Rescue, County of Simcoe Paramedics, Barrie Police, and the OPP, began searching for the missing boater. Her body was recovered the following day.

Transport Canada reminds boat owners that pleasure craft are not designed or licensed to be operated as commercial vessels. In order to operate a commercial vessel, there are rigorous certification, licensing, and required safety measures that must be followed.