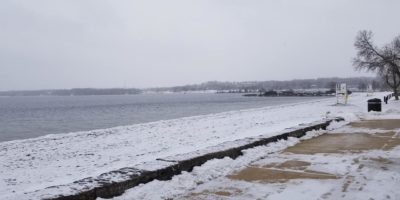 If you tell Josef Polcz to go jump in the lake and chill, that’s an invitation.

For the 11th straight year, Polcz and a group of brave swimmers took the plunge New Year’s Day in Kempenfelt Bay.

The Barrie resident has gone for a polar bear dip in all kinds of weather.

“The best is when it’s open water and you can run in,” says Polcz. “The water is cold, obviously, usually it’s between 2 and 4 degrees. The worst was in 2014 and last year. The water actually froze over.”

Polcz asked that participants and those who come out to watch to bring donations for the Barrie Food Bank, with about 150 pounds collected before the plunge on Wednesday.

He also wants to bring awareness to the Heart and Stroke Foundation.

Polcz could not take part in the dip in 2018 due to a heart condition, but his doctor has given him the green light to take the plunge.

As for that frigid water washing over your body, Polcz describes it as ‘like an electric shock.’ He says you gasp for air and it’s just a big shock to your system.