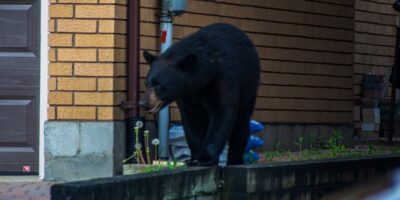 It started just after 5:30 Friday morning when police were alerted to a bear wandering around an industrial area in south Barrie.

The report came from the area of Victoria and John Streets. Police rushed to the industrial area and called in the Ministry of Natural Resources for help.

Officers tracked the bear through the Brock and Bradford Streets area, and past St. John Vianney Church as Natural Resources personnel arrived on the scene. The bear was eventually cornered in the backyard of a home near Little Avenue and Chieftain Crescent.

But not before it made a brief 10-minute stop in the backyard of Jessa Green, who took a video of the bear in her backyard with just a pane of glass separating them. “I never felt scared at all,” Green told Barrie 360. She added she’s never been so close to such an animal, “It was pretty exciting.”

Up close and personal with a bear in Barrie’s south end this morning. #Barrie #barrieontario @BarriePolice pic.twitter.com/82kEK2W3Ve

The animal was safely sedated and prepped for relocation. Police say it was alone and without cubs.

It did cause some minor damage while jumping over fences in residential areas.

“Thank you to all residents in the area who assisted Barrie Police and the Ministry of Natural Resources and Forestry by helping to keep sight of the bear and stayed inside their homes to allow for a successful and positive outcome,” reads a statement from Barrie Police. “We’re bear-y glad we were able to work with the Ministry of Natural Resources and Forestry to safely contain and relocate the bear.”