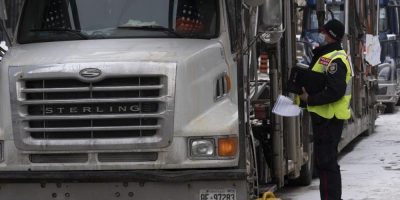 Police arrested two of the main organizers behind an antigovernment demonstration on Parliament Hill late Thursday, as large trucks continued to ignore demands they leave an ongoing blockade that has antagonized residents for weeks.

Keith Wilson, a lawyer for the so-called Freedom Convoy, confirmed to The Canadian Press that Tamara Lich was arrested after Chris Barber had been earlier. As of around 9:15 p.m., Wilson said the pair remained in custody but was not aware if they had been charged.

“Tamara told me she is not afraid. She said she will continue to fight for the restoration of our rights and freedoms for all Canadians,” he said in a statement.

Earlier in the evening Lich said she was resigned to the fact that she might be arrested and that her personal bank account had been frozen.

Lich and Barber’s arrests were among several Thursday. One man sporting an orange hat was put in handcuffs near Parliament Hill. About two dozen officers escorted him into a nearby police vehicle as a crowd of protesters followed, with some shouting “shame.”

As he was placed inside the police vehicle the song “The Final Countdown” blared from the convoy’s makeshift sound stage. When the vehicle began to drive away, with a circle of police surrounding it, several people began shouting “Freedom!”

Another man was wrestled to the ground and carried to a waiting police car by more than six officers, while at least a dozen others formed a barricade around them.

A woman in the crowd shouted, “Come on, let him go” as the arrest took place.

“If you want to leave under your own terms, now is the time to do it,” Bell said during a news briefing.

By around 8:45 p.m., the crowds dwindled as the wind whipped wet snow around the protest site and the police presence in the area appeared to lessen.

Jean-Phillip Alyotte shovelled snow up against his truck parked near the parliamentary buildings to make it harder to tow away, singing “we’re not going anywhere.”

He said if the police came that evening, he would hide in his truck and hope.

Police established a perimeter with about 100 checkpoints covering Ottawa’s downtown to keep out anyone intent on joining the protest, a move to contain the convoy demonstration that has swollen with large crowds each weekend since late January.

“What I can tell you is this weekend will look very different than the past three weekends,” Bell said.

The approximately 30,000 residents who live in the newly cordoned area, and those who work downtown or have another legitimate reason to be there, will have to navigate the checkpoints when moving about.

“I know that these are measures that our community is not used to, they will be in place only as long as necessary to remove the unlawful protests,” Bell said.

On Wednesday, police began issuing written warnings to demonstrators to leave or risk being arrested and more warnings were made throughout the day Thursday, though many participants remained openly defiant of the potential consequences for staying.

Some still partied in a hot tub on one street. Others pushed gas cans full of fuel toward the dozens of heavy trucks and RVs that have blocked off streets in the parliamentary district for three weeks now.

Bell said the Emergencies Act, invoked Monday by Prime Minister Justin Trudeau, is among the tools helping police manage what he called an “unprecedented, unlawful demonstration.”

“All of those pieces of legislation and supports we’ve got from different levels of government have directly and actively contributed to our ability to ultimately say we are in a position to move forward and look to end this demonstration,” he said.

Use of the federal emergencies law, being debated in the House of Commons, is expected to receive approval in a vote next Monday with the Liberals and NDP supporting the plan. The Conservatives and Bloc Quebecois do not.

The new temporary powers under the act include the ability to freeze bank accounts of people involved in illegal blockades, as well as ban any public assembly that blocks trade routes or critical infrastructure or threatens public safety. It also empowers insurance companies to cancel policies for commercial or personal vehicles involved in the blockades.

A truck with the Calgary-based freight firm Load Safe pulled out late Thursday after his former employer warned that the driver was risking the entire company’s future.

Load Safe owner Rich Russell said in an interview the driver, an independent owner-operator on contract, had been advised repeatedly to leave the protest.

“I have been encouraging him to leave for at least a week. I was getting threats from all over the place,” he said.

The driver refused to be interviewed as he readied his truck to depart Thursday. He pulled out to applause from a nearby crowd.

Russell said while the driver owned the truck himself he had company insurance, which was putting the entire fleet of 35 owner-operators in jeopardy.

“The only way you can get affordable insurance is for through a fleet program so he is on our insurance policy and his truck has to be plated and registered to us as well,” Russell said.

“We actually got notice from our insurance company this morning that they had been notified by the government that our policy could be potentially suspended and our bank accounts frozen. That would put me out of business. I have about 35 owner drivers and 25 employees. I have spent 45 years building this company.”

Glen Harris, a mechanic from Melbourne, Ont., said there was an agreement to kneel and allow police officers to do their jobs if they began moving to clear the area.

Harris said the hope was that any children in the group would be moved to a safe place, such as a truck, or removed completely from the area if the police began making arrests.

Police estimated last week that as many as 100 children were part of the convoy with their parents, though it was unclear Thursday how many remained. The Children’s Aid Society of Ottawa has told parents who have children with them to make alternate care arrangements for the period “following potential police action.”

One of the new orders under the Emergencies Act makes it an offence to bring a minor to an illegal blockade or even within 500 metres of one.

Breaching orders imposed through the Emergencies Act can result in penalties of up to five years in prison and a $5,000 fine.

The City of Ottawa also warned protesters their dogs would be impounded.

Police services in Waterloo, Ont., Quebec and as far away as Vancouver have confirmed they are sending officers to Ottawa to help this weekend.

Some demonstrators said they were in Ottawa simply to end COVID-19 restrictions, but others, including those who claim to be leading the convoy in Ottawa, have demanded the Liberal government be ousted. They have offered to work with opposition parties to make this happen.

The Liberal government has characterized the border blockades and the Ottawa protest as events driven by a highly co-ordinated, targeted and partly foreign-funded criminal attack on Canadian interests.

Officials point to the arrest of 13 individuals and seizure of multiple weapons at a convoy in Coutts, Alta., earlier this week, as evidence of the involvement of a dangerous, criminal element. Public Safety Minister Marco Mendicino said Wednesday some of those arrested have ties to people known to be participating in the occupation in Ottawa.