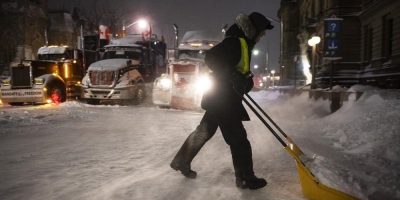 Ottawa police say officers have begun making more arrests of protesters opposed to vaccine mandates and other COVID-19 restrictions who have occupied the city’s downtown core for weeks.

Police say on Twitter there is a large police presence on Nicholas Street downtown and protesters are being advised to leave immediately.

They say some are surrendering and being arrested.

“We ask protesters to remain peaceful and lawful,” police say.

Lich, 49, has been charged with counselling to commit mischief.

She and Barber are scheduled to appear in court on Friday.

The House of Commons will not sit Friday to debate emergency measures the government has brought in to deal with the protest just outside its doors.

A note from Speaker Anthony Rota says the sitting is cancelled because of the police operation set to take place by Parliament Hill and other locations around Ottawa’s downtown core.

The note goes on to say that anyone not in the parliamentary precinct should stay away from the core until further notice.

It adds that anyone already in the precinct should remain in buildings and await further instructions from parliamentary security.

MPs were set for another daylong debate of the government’s emergency orders that took effect earlier this week, but require confirmation by the House of Commons and Senate.

The new powers include freezing bank accounts of protest participants and barring people from assembling in specific places or joining protests that threaten trade, critical infrastructure, individuals or property.

It is also now illegal to bring children to within 500 metres of the blockades or provide supplies or property to participants.

The measures are facing a legal challenge from the Canadian Civil Liberties Association, but in the House of Commons, the measures are expected to pass with the Liberals and NDP supporting the plan and the Conservatives and Bloc Québécois opposing it.

Government House leader Mark Holland says in a statement that parties are hoping the House can reopen Saturday to continue debate. Holland goes on to say that a final vote on the measures will happen early next week.

NDP House leader Peter Julian, in a tweet, says that he and his counterparts from other parties agreed around 4:30 a.m. EST to cancel the sitting scheduled to start at 7 a.m. EST.

He adds that it is everyone’s hope that the convoy protesters leave peacefully in the coming hours.

The Senate was also expected to begin debate Friday but issued a notice saying it will remain adjourned until Monday at 2 p.m.

Some denizens of the downtown encampment appear alert to the possibility of more police action Friday, while others seem unconcerned.

Demonstrators have refused to budge despite police warnings to pack up and pull out now or risk arrest and other tough sanctions.

Lyndsay Kruisselbrink says the feeling among protesters is “very calm.”

“Everybody’s happy, lots of love,” she says. “I love the snow. This is my idea of fun.”

She says this is her third trip to the protest on Parliament Hill and the crowd has at least doubled in size from last week. She says she plans to stay until Monday.

“You have to be here to know the feeling. You just don’t want to leave. You just love the cause and all the people. It’s like your family.”

Trucks are idling on the street in front of Parliament Hill as a bitter winter storm pummelled the national capital, covering vehicles in snow and ice.

Fires are also going under tents set up near the vehicles as protesters huddle to stay warm.

Police have established a perimeter with about 100 checkpoints covering Ottawa’s downtown to keep out anyone intent on joining the protest this weekend.

Police are stopping any vehicle looking to get near the hardened area around the core, an area that spans roughly four square kilometres, shining flashlights and asking for drivers to explain why they are heading downtown.

This report by The Canadian Press was first published Feb. 18, 2022.