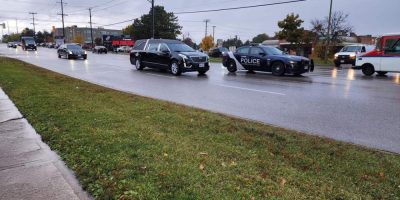 A funeral service has begun in Barrie for two police officers who died after a shooting last week.

Const. Morgan Russell, 54, and Const. Devon Northrup, 33, of the South Simcoe Police Service died after responding to a call about a disturbance at a home in Innisfil on Oct. 11.

Caskets for the two men were carried to the front of Sadlon Area in Barrie shortly before 11:30 a.m. as thousands of uniformed police and emergency responders from across the province joined the officers’ families for the joint service.

Bagpipes played as pallbearers carried the caskets to the front of the room, where flowers and portraits of Russell and Northrup were on display. Folded Canadian flags and police caps were placed on top of the caskets.

The gathered mourners stood and saluted for a performance of O Canada that opened the service, followed by a moment of silence.

Earlier in the morning, uniformed officers had lined the streets outside arena to salute the funeral cortège as it passed. Community members also gathered at the side of the road to watch and pay respects.

Police members from Toronto, South Simcoe, York Region, and Barrie police services along with hundreds of RCMP and other police force members joined the procession that began after 9 a.m on a road leading to the arena.

The procession moved through snowy Barrie streets, with paramedics and other emergency responders participating, as solemn music with bagpipes and drums filled the air during the march.

People were also invited to watch the service at the St. John’s Presbyterian Church in Bradford, Ont.

The Special Investigations Unit, which is investigating the shooting, has said the two officers who died did not draw their firearms before they were shot by a 22-year-old man at the home. The young man also died after an exchange of gunfire with a third officer who was not injured, the SIU said.

Russell, a 33-year veteran of the force, was a trained crisis negotiator, while Northrup was a six-year member who worked with the community mobilization and engagement unit and served as a member of the mental health crisis outreach team. Both officers died in hospital after the shooting.

The two deaths mark three officers shot dead in Ontario in a month after the fatal shooting of Toronto Const. Andrew Hong in Mississauga, Ont., in mid-September.

The funeral comes two days after RCMP officer Const. Shaelyn Yang was fatally stabbed in Burnaby, B.C., during an altercation at a homeless campsite. Yang was a mental health and homeless outreach officer.