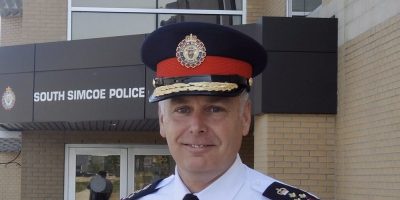 So, what does a former police chief do on his first day of retirement?

“I’m looking forward to just stepping back a little bit, taking a breath, spending some time with my family, my grandkids, my kids, my wife, and just taking it all in for a little bit”

Andrew Fletcher put his badge away Friday after five years as Chief of South Simcoe Police, two years as Deputy Chief before that, and 38 total years in policing.

“You don’t want to leave the house half-built; you want to make sure it’s got the doors on, the windows on, and everything finished, and then pass the keys to somebody. And that’s where I feel we are today. We’ve got a great command team in place. We’ve made some key promotions over the years to advance some people that are great leaders now and taking on very strict and clear roles in the organization.”

But the thing he’s most proud of, he says, is the ‘buy-in’. “People in the organization saw the vision and accepted that’s where we want to be, and they put the action into it, and work into it, to make that plan come to life.”

After 38 years of dedicated service, Chief Andrew Fletcher received his retirement badge today from Deputy Chief John Van Dyke. Chief Fletcher enjoyed one last tour on the SSPS bike before signing off. Thank you for everything Chief! Have a wonderful, well-earned retirement! pic.twitter.com/TnZdgmFFPD

Fletcher has been a big proponent of community policing – engaging with the community, and mobilizing them – because police can’t be everywhere, and can’t do everything. Public engagement, he says, gives police many extra sets of eyes and ears, turning the focus to preventing crime, rather than reacting to it.

Under his watch, South Simcoe Police introduced the use of body-worn cameras. “The technology is there, so let’s use that technology. Let’s record our interactions with the public …  there’s a picture right in front of you. There’s no disputing that. It’s a win-win for the public and the police. It gives us that tool, but it gives the public the trust to know that officer is going to react professionally, and appropriately in the situation because they know they’re being recorded as well.”

As for his successor, his best piece of advice is to engage with the community and communicate with the staff.