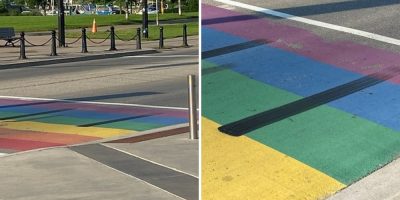 The Barrie Police Service is asking the public for help after someone defaced an LGBTQ2+ symbol in the city’s downtown.

Tire damage was discovered on the Pride crosswalk at Barrie’s waterfront, as it appears someone peeled out on the rainbow symbol. Police say it took place sometime between July 22 and 23. This is not the first time this has happened.

Police ask anyone with information on who caused this damage to contact the lead investigator at cmanna@barriepolice.ca or by phone at (705) 725-7025, ext. 2550.