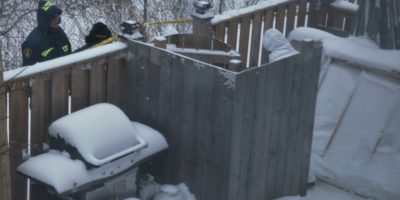 Police identify the deceased in the discovery of bodies in Collingwood

The bodies are of two men both of Wasaga Beach; Dean Copkov and old Donovan Bass.

A man faces two counts of murder and is scheduled to appear at the Ontario Court of Justice in Collingwood on January 29th.

Investigators continue to try and identify a third unknown man, believed to have been at the residence at the time of the incident.

The deaths occurred Tuesday morning in Georgian Blue (formerly known as Matthew Way) as a result of an altercation.

A woman who lives next door to the unit, tells Barrie 360 that she heard shots and saw a body lying face down in the bloody snow in the backyard.

“I could see it from my window, the body was face down in the snow.” The woman said she could see the body from her sons bedroom window.