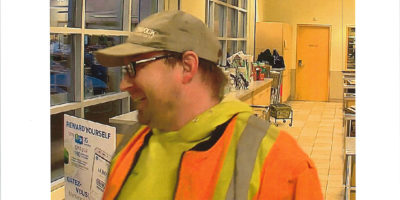 Simcoe Police are seeking the public’s assistance following a theft at the LCBO in Bradford.

On January 15th , a man entered the LCBO and allegedly stole an expensive bottle of alcohol. After his first attempt resulted in dropping and breaking a bottle while unsuccessfully trying to conceal the bottle, he notified LCBO staff to the mess.

A second attempt proved more successful and the suspect left with the expensive liquor hidden down his pants. the man is described as a heavy set white man with brown hair. He was wearing an orange construction jacket and dark work pants.

Anyone who recognizes the suspect is asked to contact Constable Daniel Carrique at 905-775-3311.