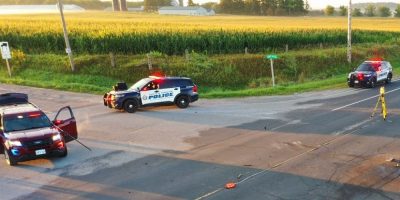 A two-car crash in Bradford early Sunday has claimed the life of a 21-year-old man from Beeton.

South Simcoe Police say the preliminary investigation has determined a westbound Mustang being driven by the victim collided with a northbound car on County Road 27 at Line 9 around 1:30 a.m.

The driver of the other vehicle, a 34-year-old Barrie man, was transported to hospital with non-life-threatening injuries.

There were no other occupants in either vehicle.

The investigation into the cause of the collision is ongoing and police are appealing to witnesses and anyone with dashcam footage to contact Constable Jessica Irwin at 905-775-3311 or 705-436-2141, extension #2030 or jessica.irwin@southsimcoepolice.ca.