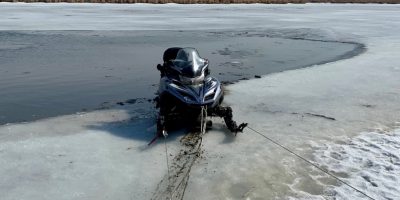 It took a team effort, but local officials were able to get a seemingly abandoned snowmobile back on terra firma after being found floating on the Holland River.

The South Simmcoe Police were called out on Tuesday with reports the sled was spotted in the water near Bridget and Dissette Streets in Bradford. There was no sign of a rider. Due to the danger presented by melting ice, officers couldn’t get close enough to retrieve the machine, but returned on Wednesday with the Holland Marsh Drainage Committee. The team was able to tow the sled to shore.

Officers later located the owner, who was fine.

On Wednesday, officers were called out with more reports of recreational vehicles going through the ice, this time it was a pair of ATVs near Pumphouse Road. Officers arrived to find the operators were able to get out under their own power.

“South Simcoe Police Service is urging residents to stay off the ice as milder weather has brought rapidly deteriorating ice conditions,” reads a statement from the Service. “Citizens are urged to keep pets and children away from all ice surfaces during this time of year when the ice is melting. The best way for everyone to stay safe is to stay off the ice.”