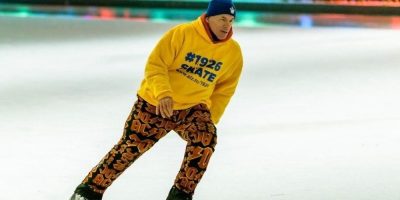 You might be thunderstruck by what Steve McNeil is doing on Family Day.

The AC/DC fan is going to skate for 19 hours and 26 minutes on Monday, Feb. 21 to raise funds for the Alzheimer Society of Simcoe County. McNeil’s marathon skate at the Webers Starbucks rink on Highway 11 just north of Orillia is in honour of his mother, Eunice, who was born in 1926 and died of the disease in Feb. 2013 after a 20-year battle with the illness.

The Toronto postal worker is also a recreational hockey referee, and he decided in 2012 to do something in memory of his mother. So, he skated for 19 hours and 26 minutes, but at the time, the idea of a fundraiser had not crossed his mind. He credits friends and family for pushing him in that direction after the death of his mom.

For the last 10 years, McNeil has laced up his skates to raise money for local Alzheimer’s organizations.

“It’s a disease that affects so many people, more people than just the person who gets sick with it,” said McNeil. “The deterioration is the hardest part for most people in the last year, and watching their loved ones just diminish to the fact they’re almost nothing.”

“Watching the end come like that is so painfully hard for so many people.”

For the first six years, McNeil skated in Toronto and then branched out in 2019 with fundraisers in the seven Canadian NHL cities before going coast-to-coast in 2020 before the pandemic hit.

This year, McNeil decided to keep the fundraising in Ontario with eight skates, the last one being on Family Day.

“I skate all through the night, all day Monday and I will finish Monday night at 7:26 p.m., which is 19 hours and 26 minutes straight.”

McNeil’s mom is the motivating factor that keeps him in stride during the skate, but his love for AC/DC also helps him push to the end, as he has their music cranked up while out on the ice.

In fact, former band member Chris Slade came to see McNeil skate a few years ago in Calgary and donated over $19,000 to Alzheimer’s. In 2017, band member Malcolm Young died of the disease.

McNeil encourages people to visit the Webers Starbucks rink and join him on the ice, or make a donation of $19.26 to the cause.

Donations can be made through McNeil’s website at https://www.1926skate.com .