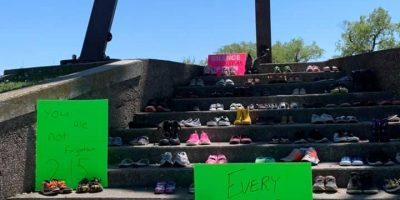 Rows and rows of mostly children’s shoes line the steps leading to The Spirit Catcher on Barrie’s waterfront, placed there by people on Sunday as a memorial for the 215 children whose remains were found near a former residential school in Kamloops, British Columbia.

Green placards with the message “Every Child Matters” was also placed on several of the steps.

The display was posted to Facebook by the Barrie Native Friendship Centre.

Meanwhile, the Canadian flag was lowered to half-mast on Sunday at the Peace Tower in memory of the 215 children.

The Department of Heritage said flags at all federal buildings and establishments across Canada would be lowered until further notice “in memory of the thousands of children who were sent to residential schools, for those who never returned and in honour of the families whose lives were forever changed.”

To honour the 215 children whose lives were taken at the former Kamloops residential school and all Indigenous children who never made it home, the survivors, and their families, I have asked that the Peace Tower flag and flags on all federal buildings be flown at half-mast.

A similar gesture is taking place at Ontario government buildings.

I have asked that the flags at all Ontario government buildings and establishments across the province be flown at half-mast in memory of the 215 Indigenous children whose lives were tragically lost at the former Kamloops residential school.

Flags are also being lowered to half-mast at city and town halls across Canada.

In Barrie, Mayor Jeff Lehman tweeted on Sunday that the flags at City Hall would be lowered for 215 hours, or nine days.

On Monday, the flags at City Hall will be lowered to honour the memory of the 215 children found in a mass grave at the residential school in Kamloops. They will be lowered for 215 hours, or nine days.

The discovery of the remains was announced May 27 following a preliminary survey of the grounds where the former residential school once stood was completed.

They were found over the Victoria Day weekend using a ground-penetrating radar, according to the Tk’emlups te Secwépemc First Nation.

Some of the remains were of children as young as three-years-old.